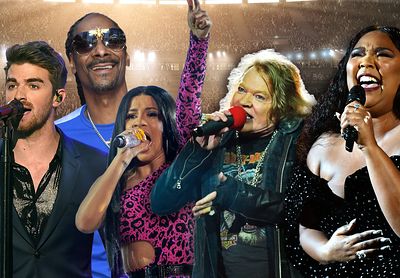 The Super Bowl may be the headliner of the weekend, but in Miami it’s got some stiff competition.

The Kansas City Chiefs and San Francisco 49ers will take center stage in the Super Bowl, but they’ve got some stiff competition for the hottest show in town this weekend in Miami.

Lizzo, Guns N’ Roses, Cardi B, Maroon 5 and Snoop Dogg are among the dozens of high-wattage musicians scheduled to perform at some 46 concerts between Thursday and Sunday.

The musical entertainment could be a saving grace for football fans who’ve headed to Miami in hopes of scoring a last-minute ticket to the Super Bowl. If they come up empty-handed, they could always go see a concert instead — at a relatively cheap price, in some cases.

Kanye West announced Wednesday that he will be performing a special Super Bowl Sunday Service concert — and tickets start only at $20. (It’s mostly sold out.) That’s of course a bargain compared to Super Bowl tickets, which were nearing an average price of $9,000 as of Wednesday.

“The Super Bowl weekend turned into a festival. The lineup is as good if not better than Coachella,” said Jesse Lawrence, founder of TicketIQ, a site that tracks ticket prices across multiple resale platforms.

In fact, an estimated 150,000 people will visit Miami this weekend just to attend the concerts, said Rodney Barreto, chairman of the Miami Super Bowl Host Committee.

“The Super Bowl has an incredible brand, probably one of the strongest brands out there,” he said. And the location seems to have amped up the excitement this year, he added. The Super Bowl usually attracts “a bunch of artists and people,” he said, “but I happen to think that Miami is putting everyone else in the dust.”

The top-selling event in Miami this weekend is the Super Bowl Music Fest, a three-night event featuring Guns N’ Roses, Maroon 5 and DJ Khaled, according StubHub EBAY, -3.65%  and Vivid Seats.

Friday — when Snoop Dogg and the 1980s rock legends Guns N’ Roses are performing — is the most popular of the three nights, StubHub said. Tickets start at $100.

Tickets to the Saturday night show, where Maroon 5 will perform with special guest Dan + Shay at the American Airlines AA, -1.54% Arena, start at $50. Even with the additional headline performance, “$50 is a good deal compared to what a Maroon 5 ticket would otherwise cost,” Lawrence said.

The concerts and other entertainment are available for a fraction of the price of attending the Super Bowl. For $4,721, the cheapest available ticket to the game, you could get either 94 tickets to see Maroon 5 or 94 tickets to a live Q&A with Ellen DeGeneres in Miami this weekend, TicketMaster LYV, -2.77%, the official ticketing partner of the Super Bowl, calculated for MarketWatch. It could also get you 230 tickets to see Zac Brown or 12 tickets to Lady Gaga.

It can’t, however, get you any tickets to any of the exclusive invite-only events in Miami this weekend. They include an event hosted by Universal Pictures CMCSA, -2.08%   called “The Road to F9” (a reference to the latest “Fast & Furious” movie) where Cardi B, Ozuna, Ludacris, Wiz Khalifa and Charlie Puth will be performing.

Demand for Super Bowl weekend concerts outstrips nearly all the other concerts that have taken place in Miami in January, with the exception of Billy Joel, Celine Dion and the Glenn Miller Orchestra, according to Vivid Seats.