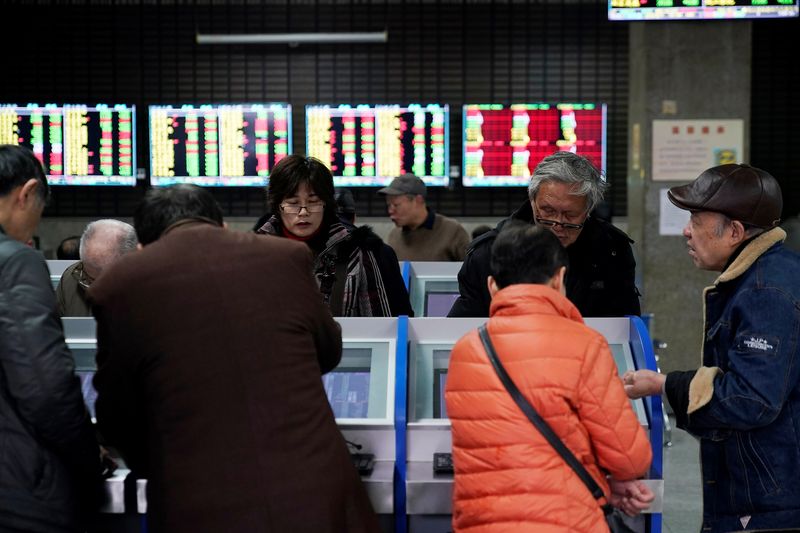 TOKYO (Reuters) – Shares tumbled on Monday as investors grew increasingly anxious about the economic impact of China’s spreading virus outbreak, with demand spiking for safe-haven assets such as the Japanese yen and Treasury notes.

“I think this would continue this week, until China markets resume trading next week and the coronavirus outbreak subsides.”

The ability of the coronavirus to spread is getting stronger and infections could continue to rise, China’s National Health Commission said on Sunday, with nearly 2,800 people globally infected and 81 in China killed by the disease.

China announced it will extend the week-long Lunar New Year holiday by three days to Feb. 2 and schools will return from their break later than usual. Chinese-ruled Hong Kong said it would ban entry to people who have visited Hubei province in the past 14 days.

Market participants kept a wary eye on developments around the virus, which the World Health Organization (WHO) last week deemed “an emergency in China,” but not, as yet, for the rest of the world.

MSCI’s broadest index of Asia-Pacific shares outside Japan () was off 0.4%, although trade in the region has already slowed for the Lunar New Year and other holidays, with financial markets in China, Hong Kong, Taiwan, South Korea, Singapore and Australia closed on Monday.

U.S. Treasury prices advanced, pushing down yields further, with the benchmark 10-year notes () dropping to a 3-1/2-month trough of 1.627% in early Asian trade.

In the currency market, the concerns about the virus supported the yen, often perceived as a safe haven because of Japan’s net creditor status.

The heightened fears of the economic impact of the coronavirus also pressured oil and other commodity prices, except safe-haven gold.

“Investors will react quickly to any sign of negativity and this is no exception as China announces that the issue has become an emergency. This could keep oil prices fragile until the coronavirus shows signs of slowing down,” said Mihir Kapadia, chief executive at Sun Global Investments.

rose as much as 1.0% to $1,585.80 per ounce, the highest level since Jan. 8, as rising concerns over the spread of a virus outbreak in China and its potential economic impact prompted investors to buy the safe-haven metal.