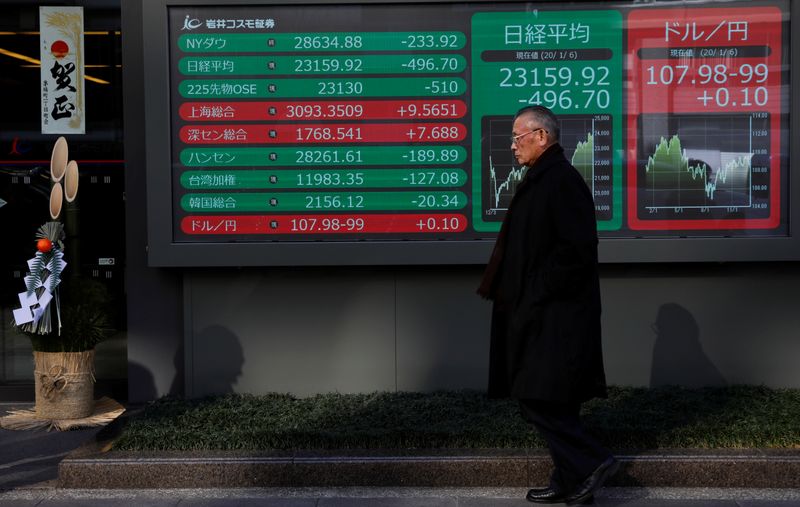 By Swati Pandey and Wayne Cole

As the death toll reached 81 and the virus spread to more than 10 countries, including France, Japan and the United States, some health experts questioned whether China can contain the epidemic.

Beijing has already extended the Lunar New Year holiday to Feb. 2 nationally, and to Feb. 9 for Shanghai. On Tuesday, the country’s largest steelmaking city in northern Hebei province, Tangshan, suspended all public transit in an effort to prevent the spread of the virus.

With Chinese markets shut investors were selling the and the Australian dollar as a proxy for risk.

“What is becoming clearer is that the Chinese economy will take a hit for a time,” said David de Garis, a director of economics at National Australia Bank.

“Travel and tourism is being impacted, including in Australia where China has the largest share in exports of personal tourism and education.”

On Monday, key indexes for British, French and German equity markets slid more than 2%, as did pan-European markets on worries about the potential economic impact from the deadly virus. Stocks on Wall Street fell more than 1%.

E-Mini futures for the S&P 500 () held near three-week lows after slumping 1.6% overnight for their biggest single day percentage loss since last October.

Analysts at JPMorgan (NYSE:) said the coronavirus outbreak was an “unexpected risk factor” for markets though they see the contagion as a regional rather than a global shock.

“The rise in risk aversion and worry of a region-wide demand shock … means the knee-jerk market reaction will likely be to richen low-yielding government bonds,” JPMorgan analysts wrote in a note.

“Concerns about coronavirus contagion has driven yields lower and is the latest risk of a series that have driven US Treasuries (UST) yields far below what fundamentals indicate. We remain short 30-year UST.”

Futures imply around 35 basis points of easing by year end . The Federal Reserve is widely expected to stand pat at its policy meeting this week, but markets will be sensitive to any changes to its economic outlook.

JPMorgan said they have not yet altered their developed or emerging markets forex forecasts though they were taking profits on their “bullish” EUR/USD positions and remain “considerably long” on Swiss francs which benefits from safe-haven demand. Short build-up in the was another risk hedge.

The yen , which has been rising for the past five sessions, paused at 108.12 per dollar. The Aussie also steadied after posting its biggest one-day percentage loss in three weeks on Monday.