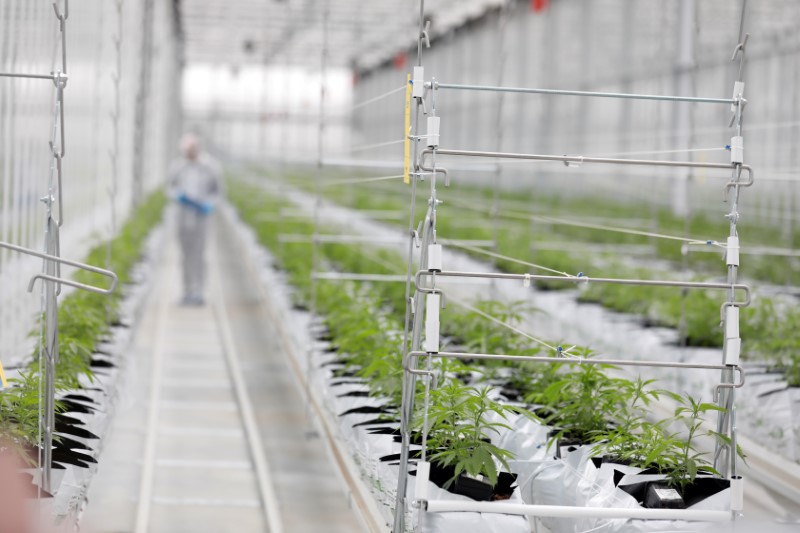 NEW YORK (Reuters) – Some cannabis stocks are seeing their prices surge as investors hunt for winners in the ashes of an industry shakeout that hammered share prices last year.

Shares of Tilray Inc (O:) and Canopy Growth Corp (TO:) have climbed more than 20% since the start of the year, while Cronos Group Inc (TO:) and Aphria Inc (TO:) are up more than 10%. The ETFMG Alternative Harvest exchange-traded fund (P:), which targets the global cannabis industry, is up 5.8% in that period.

A speculative “green rush” fueled by the legalization of cannabis in Canada and some U.S. states faltered last year, as investors grew worried about oversupply and whether companies could bring enough customers out of the black market. Uncertainties over U.S. regulations and revenue shortfalls further weighed on the sector.

Investors are now betting that some of these companies have become undervalued. Canopy, for instance, trades 10% below the average target price among the 22 analysts that cover it, according to Refinitiv data. Its forward price-to-sales ratio, meanwhile, is at 16.4, well below its peak of 32.1 it hit in January 2019 and more than double its low from November.

“We went through the golden age and then we fell into the dark ages where valuations were assuming that these companies were just dead,” said Michael Underhill, chief investment officer at Capital Innovations.

Others are focusing on companies that are not pure plays on cannabis, which they expect to better weather a tough regulatory environment in the U.S.

Illinois this year became the 11th U.S. state, along with the District of Columbia, to allow the recreational sale of cannabis. Yet a ballot measure to legalize recreational use in Florida, the nation’s third most-populous state, will likely not appear until at least 2022, according to a note from research firm Jefferies.

“Investors have realized that the rollout from a regulatory perspective isn’t as efficient as it should be,” said Jason Wilson, who focuses on cannabis research and banking at ETF Managers Group, which manages the $810 million ETFMG Alternative Harvest ETF.

Dan Ahrens, portfolio manager of the $49 million actively-managed AdvisorShares Pure Cannabis ETF (P:), believes the sell-off in cannabis shares was exacerbated by aggressive short-selling, or investors betting against the prices of cannabis stocks.

He is focusing on smaller companies such as Innovative Industrial Properties Inc (N:), a real estate investment trust that leases greenhouses to grow medical-use cannabis, and cultivators such as Village Farms International Inc (TO:) and OrganiGram Holdings Inc

At the same time, he is underweight large Canadian companies such as Tilray in favor of companies that will focus more directly on the U.S. market.

There are “still too many companies in the space,” he said. “Some will make it and some won’t.”