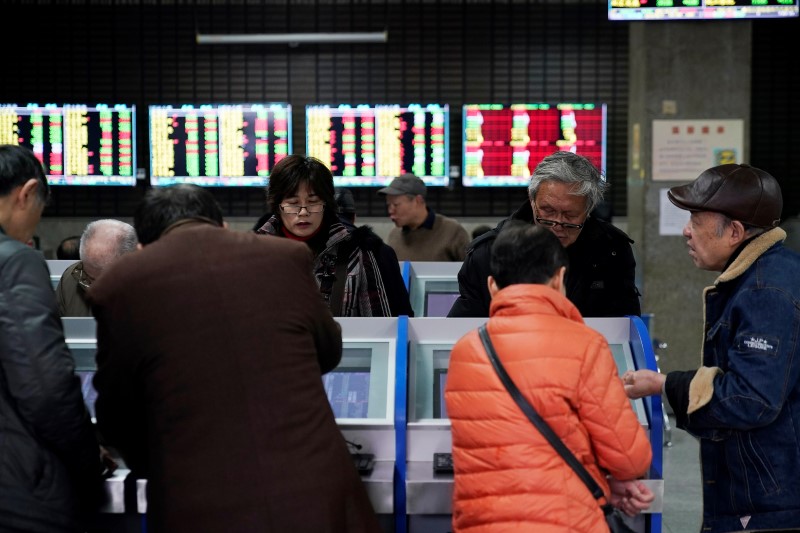 TOKYO (Reuters) – World stocks inched ahead to a record high on Thursday after the United States and China signed an initial deal to defuse their 18-month trade war, though financial markets were wary as a number of thorny issues remained unresolved.

MSCI’s broadest index of world stocks firmed 0.03% in Asia after closing at record level on Wednesday while its index on Asia-Pacific shares outside Japan rose 0.13%, with India and Australia hitting record highs.

Japan’s rose 0.14% while mainland China’s Shanghai composite index was almost flat. Pan-European were up 0.03% and German ticked up 0.1% in early trade.

U.S. President Donald Trump and Chinese Vice Premier Liu He on Wednesday signed a deal that will roll back some tariffs and see China boost purchases of U.S. goods and services by $200 billion over two years.

“Whether somebody looks at this as big progress or little progress, it is something tangible and so the arrow is pointing in a direction that the market is comfortable with,” said Chuck Carlson, chief executive officer of Horizon Investment Services at Hammond, Indiana in the United States.

The Phase 1 deal however does not fully eliminate the tariffs while the $200 billion purchase targets, which include energy, farm and manufacturing products, look daunting to achieve.

Nor does it address structural economic issues that led to the trade conflict. Officials say these will be dealt in Phase 2 negotiations, though the differences there are so fundamental that many investors doubt whether any deal will come through.

“U.S.-China tensions go beyond trade and will remain even after the Phase 1 deal signing and during the Phase 2 negotiations, and may accelerate after the U.S. election,” said economists at Citigroup (NYSE:) Global Markets

“The (deal’s) enforcement mechanism allowing unilateral actions essentially implies the risk of a snapback of U.S. tariffs or China’s commitments,” they added.

The index was dragged down by fall in financial shares following lacklustre earnings from Bank of America (NYSE:) and Goldman Sachs (NYSE:).

“While the trade deal has provided a relief, there wasn’t any positive surprises for markets. For shares to rise further, we need more evidences of improvement in the real economy and earnings,” said Hirokazu Kabeya, chief global strategist at Daiwa Securities.

U.S. shares are traded above 18 times expected earnings, near their post-2008 financial crisis peak marked at the start of 2018.

Weak inflation was evident also in UK where consumer price inflation slowed to 1.3%, its slowest rate in three years.

The data fanned bets the Bank of England will cut interest rates at the end of this month, pushing the 10-year gilts yield to 2 1/2-month low of 0.630%.

The British pound last traded at $1.3047, having managed to recover a tad from its three-week low touched earlier this week.

The Swiss franc held firm, having rising to its strongest against the dollar in over a year and its highest against the euro in almost three years after the United States added Switzerland to its watchlist of currency manipulators.

Washington’s decision led traders to think it will become difficult for the Swiss National Bank to intervene to weaken the franc in the future.

In contrast, the hovered just below its 5-1/2-month high touched earlier this week after Washington dropped its currency manipulator label on China.

Coupled with the trade deal, warmer ties between the two countries are seen as positive for the Chinese economy and its currency.

Other currencies have mostly muted reaction to the trade deal.

Oil prices edged back after touching a six-week trough the previous day on data showing big increases in U.S. refined products and hopes for more Chinese purchases of U.S. oil and gas.