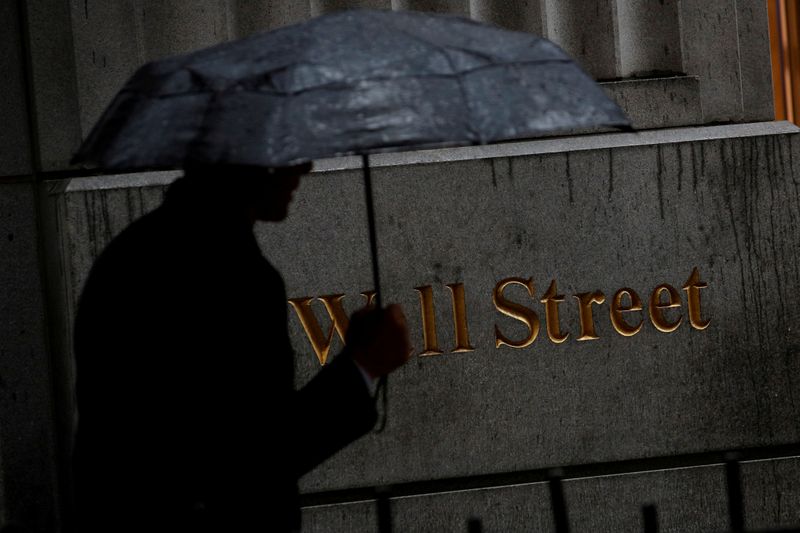 © Reuters. FILE PHOTO: A man walks through the rain on Wall St. outside the NYSE in New York

LONDON (Reuters) – European shares fell on Wednesday and U.S. equity futures pointed to weakness on Wall Street after Iran’s attack on U.S.-led forces in Iraq, but earlier sharp market moves were starting to fade as fears abated that the raid would lead to an immediate military escalation.

Hopes grew the United States would stop short of strong retaliation after U.S. President Donald Trump tweeted “All is well!”, and “So far, so good!”.

Futures for the S&P500, down almost 2% at one point, were trading just 0.10% lower by 0830 GMT, while Asian equities closed off their lows and Japan’s safe-haven yen stabilized.

Oil remained around 1% higher while gold held at new seven-year highs after the missile attack on the Ain Al-Asad air base and another in Erbil in Iraq, hours after the funeral of an Iranian commander who was killed by a U.S. drone strike last week .

A U.S. official said the United States was not aware of any casualties from the strikes. Trump is expected to make a statement later on Wednesday.

“The live situation was optically quite dramatic but the important thing to focus on is the no-human-casualty dimension which gives ample space to de-escalate the situation,” said Salman Ahmed, chief investment strategist at Lombard Odier Investment Managers.

“The Trump factor is the random factor but what’s visible is that no one wants war and that’s what markets are focusing on.”

A pan-European equity index opened 0.5% lower though it remains just 1.2% off record highs hit at the end of 2019, its losses limited by a half-percent gain in energy shares. MSCI’s index of global equities pulled back 0.2%.

Futures for all three U.S. indexes were lower but they had clawed back most of their earlier falls.

Some reckon markets are now in wait-and-see mode, with a hawkish statement from Trump or more attacks by Iran the likely driver of the next stage of the risk selloff.

“If you see U.S. treasuries rallying a bit this morning, expect them to rally quite a bit further should there be a forceful response from the United States, which I’d imagine there would be…from a market perspective I think this one could run and run,” Rob Carnell, Asia-Pacific chief economist at ING in Singapore.

U.S. 10-year Treasury futures had earlier peaked at their highest level since November, and were last up 0.18%.

On currency markets, the attacks had sent the yen spiraling to three-month highs beyond 107.7 per dollar but gave up all those gains to trade flat at 108.4. Another safe-haven currency, the Swiss franc, also gave up knee-jerk gains.

“If the market was really worried that the end of the world was nigh, dollar/yen would have collapsed, and that’s clearly not been the case,” said Stuart Oakley, global head of flow FX at Nomura in Singapore.

The buying of gold and oil also eased as the trading session wore on – global benchmark futures which had shot $70 per dollar to their highest since mid-September, were last up 0.5% at $68.1 per barrel.

Lombard Odier’s Ahmed said he had not reduced equity holdings overall but had increased exposure to energy stocks.

“We adopted a long oil hedge to portfolio and we are maintaining that… oil may be one market that’s not reflecting geopolitical risks.”