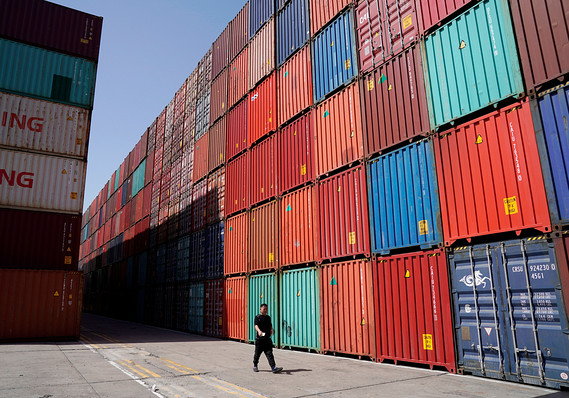 A container area at the port in Shanghai, China. Imports from China have tumbled in 2019 during a trade war with the U.S.

The numbers: The trade deficit fell sharply in November for the second month in a row and sank to the lowest level in three years, reflecting a decline in Chinese imports and the reemergence of the U.S. as an energy superpower. 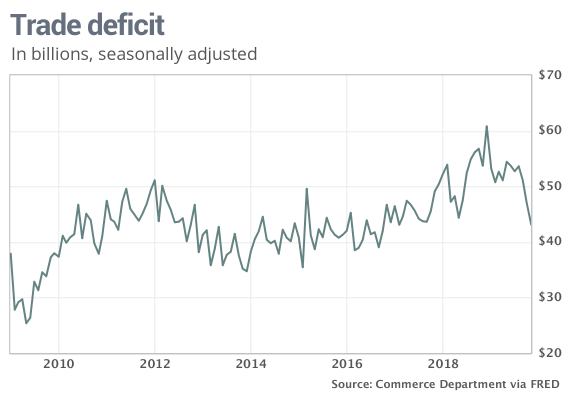 The trade gap dropped 8.2% to $43.1 billion in November, the government said Tuesday, basically matching the MarketWatch forecast. It’s the smallest deficit since October 2016.

Most of the decline recently has been tied to a shrinking deficit with China, whose imports have fallen in the face off stiff U.S. tariffs. Surging U.S. oil exports were another contributor.

If the gap remains around the same size in December, the U.S. could post the first annual decline in its trade deficit in 2019 in six years.

What happened: Exports rose 0.7% to $208.6 billion in November. The U.S. exported more aircraft engines, autos and equipment for oil drilling and exploration.

The deficit in goods with China fell another $2.2 billion in November to $25.6 billion.

What’s unclear is whether the gap will continue to shrink or by how much. Most of the decline in the past several months may reflect short-term disruptions caused by the trade war as companies sought to time orders around new tariffs.

Still, a sharp decline in the U.S. trade gap with China suddenly has the U.S. on the verge of posting its first annual decline since 2013.

What’s also helped tug the deficit lower are growing U.S. exports of oil and natural gas. The U.S. petroleum surplus in November rose to $800 million and was the highest on record.

Imports of crude oil, meanwhile, fell to the lowest level in almost 28 years.

The big picture: The U.S. and China next week are expected to sign the first phase of what they hope will be a broader trade deal, but experts warn the most contentious disputes will be harder to resolve. They say the trade impasse could drag on for months if not years.

Yet leaders of the world’s two largest economies seem intent of putting the dispute on the back burner, at least for now, after a broad slowdown in global growth. A flareup in tensions last summer damaged the economies of both countries and contributed to a worldwide slump in manufacturing.

In any case, large U.S. trade deficits have persisted for years and are unlikely to go away. Even as the gap with China has shrunk, it’s widened with other countries such as Mexico and Taiwan.