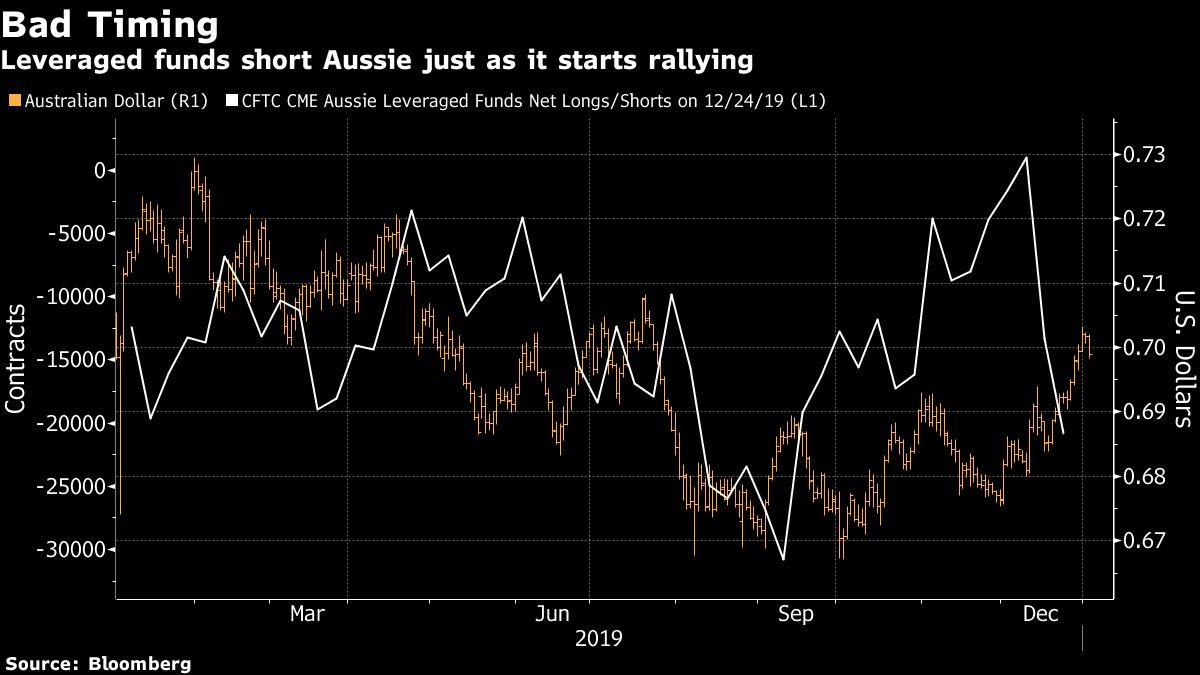 (Bloomberg) — The dollar’s surge in December made it a Christmas to forget for funds who had gone short. They will be hoping key data this week help send the currency back down.

The Aussie rocketed 3.8% last month, its biggest gain in more than two years, as the U.S. and China reached an initial trade deal. The announcement boosted risk assets across the world, and especially the currency of Australia, which counts China as its largest trading partner.

The rally saw the Aussie climb above its 50-, 100- and 200-day moving averages in the space of just two weeks, the latter being surpassed for the first time since April. The currency eventually peaked at a five-month high of 70.32 U.S. cents on New Year’s Eve before pulling back toward the end of last week.

The timing of the Aussie’s revival was particularly unfortunate for leveraged funds. After trimming short positions from September to December, they flipped back to a bearish posture in the week ending Dec. 17. That switch coincided with U.S. President Donald Trump’s announcement that a trade truce had been agreed with China.

Still, all may not be lost for the bears.

A big hurdle awaits the Aussie in the form of November retail-sales data due Friday. Sales growth has hovered around zero in recent months, averaging a measly 0.2% through the first 10 months of 2019. While economists are tipping a modest improvement to 0.4%, a miss may be particularly damaging as Reserve Bank of Australia Governor Philip Lowe said last month he was still confident of a pickup in consumption.

There’s plenty of room for traders to ratchet up bets on an interest-rate cut in February given the odds are currently just 48%. If the retail-sales numbers disappoint, Aussie bears will be looking for the currency to fall back to at least its 200-DMA, which was at 68.99 cents late on Friday.

Technical indicators also suggest the Aussie may be due for a more extensive pullback. The Aussie-U.S. dollar pair’s slow stochastics, an indicator of momentum, is now in overbought territory. This indicates another move lower may be just around the corner.

Below are the key Asian economic data and events due this week: