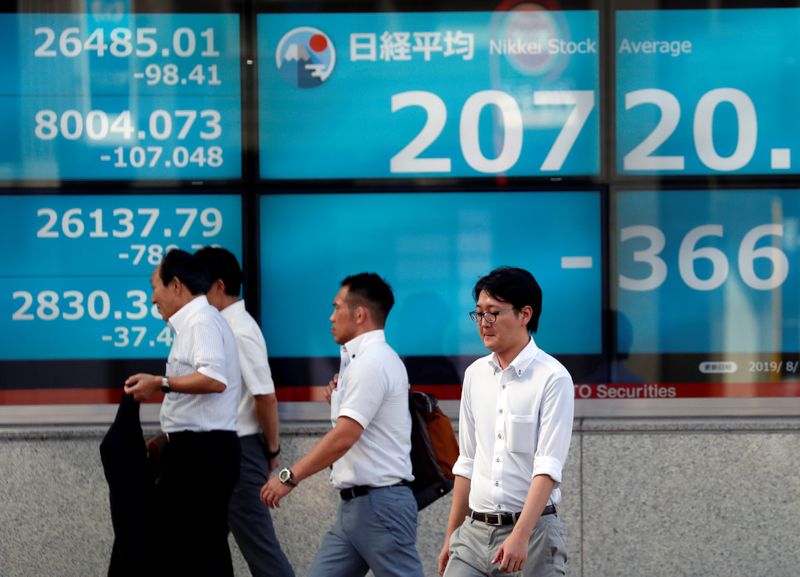 TOKYO (Reuters) – Asian shares and U.S. stock futures darted in and out of losses on Tuesday, as the holiday lull offset optimism that a U.S.-China trade deal will boost exports and corporate earnings.

MSCI’s broadest index of Asia-Pacific shares outside Japan () was down 0.01%.

Sterling traded near a four-week low versus the euro and a three-week trough against the dollar on growing doubts over how Britain will navigate the transition period for its exit from the European Union.

Oil prices held steady before data on U.S. crude inventories later on Tuesday, but there are signs that recent supply cuts may not last after Russia’s energy minister said oil producers could ease output restrictions in March.

A de-escalation of a trade conflict between the world’s two-largest economies is a positive for companies that feed global supply chains, but some investors want to wait until next year to see how long the current thaw in Sino-U.S. relations lasts.

“Risks to the outlook receded this year, which supported financial markets, but we cannot say the same thing about next year,” said Hiroshi Miyazaki, senior economist at Mitsubishi UFJ Morgan Stanley (NYSE:) Securities in Tokyo.

“No one can predict what will happen with U.S.-China relations, and the U.S. still has some tariffs on Chinese goods in place.”

Trading is expected to be subdued as many financial markets will start closing from Tuesday for the Christmas holidays.

Shares of Boeing Co (N:) gave the Dow a big boost after the planemaker ousted its chief executive officer over a prolonged crisis following two fatal crashes of its best-selling 737 MAX jetliner.

Equity investors got a rare double dose of positive news earlier this month when Washington and Beijing agreed a preliminary deal to avoid additional U.S. tariffs on Chinese goods and a British general election gave the ruling Conservative Party a free hand to enact its Brexit agenda.

However, the currency market shows some investors remain circumspect, because new problems with trade friction and Brexit could easily emerge next year.

Sterling has given up all the gains it made immediately after the British general election on Dec. 12.

Under the so-called Phase 1 trade deal, the United States suspended tariffs on Chinese goods that were scheduled to go into effect on Dec. 15 in exchange for a doubling of Chinese purchases of U.S. agricultural goods.

However, the United States left in place 25% tariffs on $250 billion of Chinese goods.

OPEC and other leading oil producers may consider easing oil output restrictions at their meeting in March, Russian Energy Minister Alexander Novak said in an interview aired on Monday.