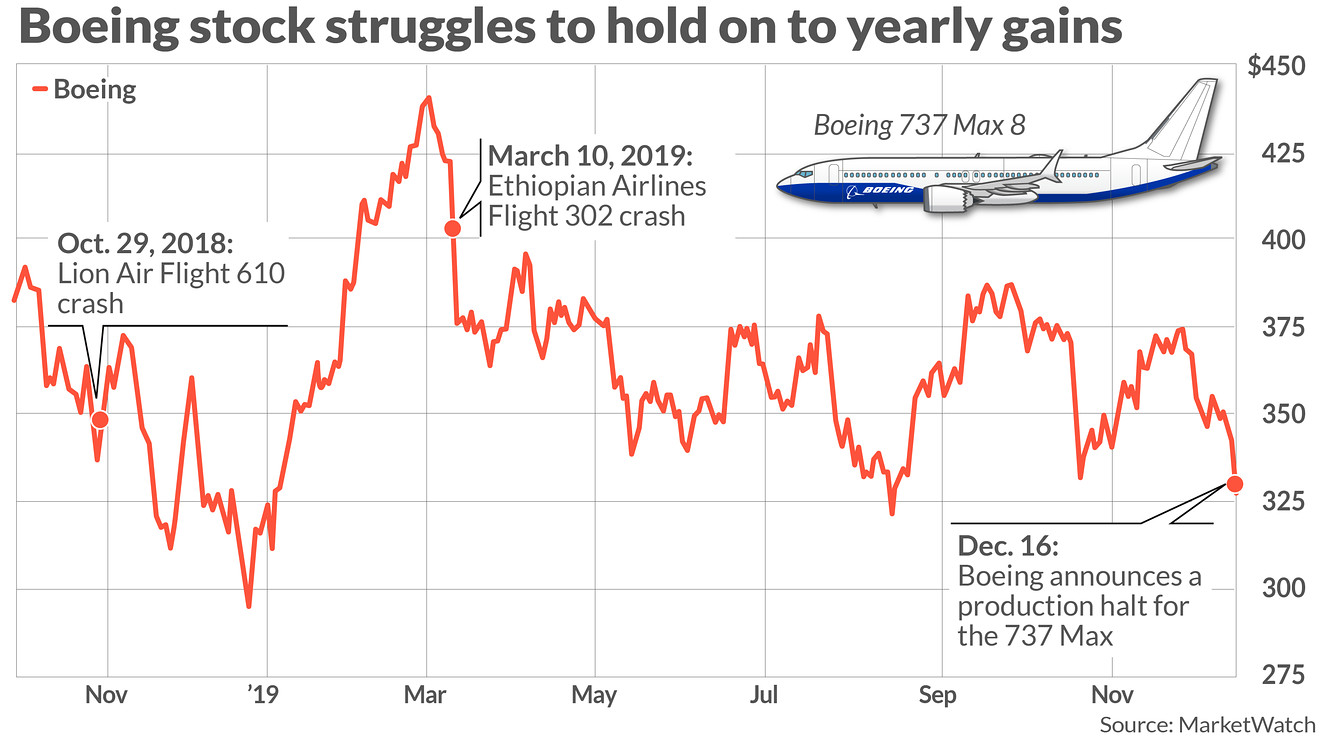 Boeing Co.’s decision to halt production of its 737 Max jet trickled down to equity markets and fanned concerns about the U.S. economy on Wednesday, although the stock itself rebounded after a shaky start of the trading day.

Boeing BA, -0.07%  shares rose 0.6% and were holding on to 2% gains for the year despite the continuing worries about the 737’s return-to-service timeline. Shares of its main suppliers fell, contrasting with gains for the broader equity indexes.

The planes have been grounded world-wide since March following two deadly crashes later linked to a faulty antistall feature. Boeing has been working on a software fix, but the plans to bring the jet back to the skies have stretched beyond what the company and Wall Street initially had expected.

In a statement late Monday, Boeing said the decision to halt production starting in January was the “least disruptive” to its long-term production system and supply-chain health. It also said it expects no layoffs or furloughs in connection to the halt, and it will prioritize the delivery of the 400 737 Max airplanes it has in storage.

Boeing did not say when it expects to resume production, and on Wednesday shares of several of its main suppliers were heading south. The stock of Spirit AeroSystems Holdings Inc. SPR, -2.62%, one of the companies most exposed to Boeing, was down 1.7%.

Spirit, with about $8 billion in yearly sales, makes aircraft components for planes by both Boeing and Airbus SE AIR, +1.76%, among others, and has built parts for the 737 families in Kansas for more than 50 years, according to its website.

Analysts at Canaccord Genuity said in a note Wednesday the company derives about 50% of its revenue from the Boeing 737, and it is “the most at risk” from a protracted halt.

A Spirit spokesperson said that the company is “working closely” with Boeing to determine what the halt will mean for Spirit. “As decisions are made on how to best mitigate this additional impact, we will communicate any new information to employees and other stakeholders,” the spokesperson said.

A “best-case scenario” for Boeing and its suppliers would be a production pause until mid-February, the Canaccord Genuity analysts said.

“Note that it is likely Boeing will need a period of time to ‘wake-up’ the 737 factory once it resumes production, so the timing of the return to (42 jets a month), and even 52/month, could be pushed further to the right depending on the length of the pause,” they said.

It’s in Boeing’s interest to minimize supply chain risk, the analysts said. The company “will continue to absorb much of the financial impact and will keep its supply chain relatively supported,” they said.

Analysts at UBS called the halt likely “one of the hardest decisions (Boeing) has had to make in a long time.” The move “is clearly a good one on paper for mitigating financial risk, but it’s the operational risk on the turning the system back on that is now incremental,” they said.

It was not clear whether Boeing plans to pay suppliers during the halt and if suppliers will have to suspend their 737-related production, analysts at Credit Suisse said in their note. Boeing’s promise to protect its supply chain “may suggest that Boeing will continue to pay its suppliers to produce,” the analysts said.

Throughout the crisis, Boeing shares have shown some resilience, although the stock fell 13% in March and 11% in October, when a report said the company allegedly knew of problems with the 737 Max before the plane took to the skies, and may have misled aviation authorities.

Of Boeing’s $81 billion in sales expected for 2019, down from $101 billion in 2018, about 40% comes from its commercial airplanes unit and about 30% from its aerospace and defense business. Wall Street on average rates the stock a buy with a target price of $389.87, which would be an upside of 19%. That’s according to FactSet, which polls estimates from 23 analysts.

The 737 Max family first launched in January 2016. The single-aisle planes use about 20% less fuel than predecessors and weigh less, and they are thought to be an ideal workhorse for airlines.

That’s mainly because of their “Goldilocks” passenger capacity and ability to do both long- and short-haul flights. Boeing first took orders for 737s in 1965, and its closest competitor, the Airbus A320, has an extensive backlog.

Back in April, analysts at Oxford Economics said those characteristics, plus the Airbus backlog, had shielded Boeing from a mass cancellation of orders. They also predicted a relatively mild ripple effect for the U.S. aerospace industry, with defense orders offsetting a small contraction, and no effect on the U.S.’s GDP.