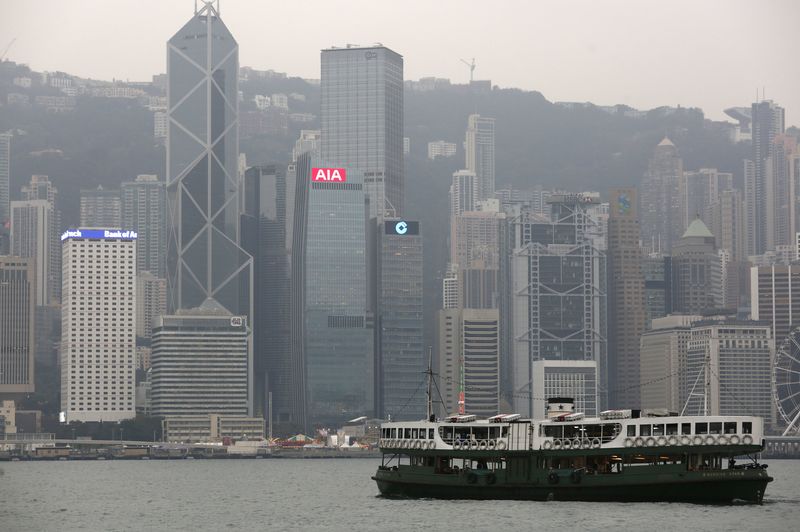 © Reuters. Here’s What Analysts Say About Hong Kong Stocks for 2020

Major brokerage firms, in their 2020 outlooks, have been blaming factors from macro issues to sector-specific concerns. Morgan Stanley (NYSE:) has said a better batch of financial and property firms can be found in rival Singapore. To UBS Group AG, Hong Kong stocks are still not cheap versus the city-state.

This year started strongly for Hong Kong stocks after double-digit declines in 2018. But then trade concerns were inflamed and the city was rattled by protests, plunging the economy into recession.

There were some sign of optimism late last week, with the benchmark jumping 4.7% to notch its best three-day run since June amid fresh signs a trade deal was near. The first phase of a broader agreement was announced later Friday. Still, the Hang Seng Index’s 7% gain for 2019 trails double-digit advances for many stock indexes around the world, including China’s. The gauge was 0.2% lower on Monday, compared with a 0.1% dip in the .

Here’s what some strategists have had to say on Hong Kong equities.

The brokerage remains underweight the MSCI Hong Kong Index, saying half of the components’ combined revenue is exposed to the city, versus 19% for the Hang Seng Index and 4% for the Hang Seng China Enterprises Index. Morgan Stanley ranked MSCI Hong Kong, up 6.3% this year, last among 30 markets “despite an improving relative price-to-book valuation. Our macro and analyst team sees a longer-term period of adjustment for key domestic sectors — especially for the banks.”

That as Hong Kong’s economy is projected to shrink this year and barely grow in 2020, according to Morgan Stanley. Commercial-property rents and residential prices are projected to fall further.

Nonetheless, Morgan Stanley in November raised its targets for Chinese and Hong Kong stock indexes, the firm’s first across-the-board boosts for the region since February. Then, it reacted to both markets’ start-of-year pop. This round is “more driven by our more-optimistic views toward earnings growth in 2020 and 2021.” Morgan Stanley predicted this quarter may see China’s lowest economic-growth rate before improving.

Versus current levels, the new base-case scenarios called for single-digit gains the coming 12 months for both Chinese and Hong Kong stock indexes. The firm also ended its prior preference for A-shares, in part on a “richer valuation relative to the offshore market.”

Hong Kong stocks are among the least-favored equity markets in Asia Pacific next year for UBS strategists including Niall MacLeod, with their underweight rating offsetting an overweight call on China’s market. Beyond trade risks, they said last month in a research note that Hong Kong financial companies face margin pressure from 2019’s cuts in U.S. interest rates. The city’s dollar is pegged to the greenback, which results in Hong Kong monetary policy generally matching America’s.

Though Hong Kong stock valuations “are now more attractive” after this year’s underperformance, the strategists added the market is “still not cheap relative to Singapore on a sector-adjusted basis” and with Hong Kong’s uncertainty persisting. Other risks cited for equities there included exposure to China’s still-slowing economy and “local politics.”

In a separate report, UBS analysts including Wendy Liu wrote that Chinese stocks listed in Hong Kong “may outperform” those in the mainland in 2020, possibly resulting in what’s now a 26% valuation gap between A-shares and H-shares to narrow.

The firm has been underweight stocks in both Hong Kong and China, in part on the latter’s slowing economy. Despite lagging in 2019, the city’s equities continue to trade at a “significant premium to Singapore,” Daiwa Capital Markets strategist Paul Kitney recently wrote. Hong Kong’s price-to-earnings ratio is about 20% higher.

Without specific reference to the impact of local politics, Goldman Sachs Group Inc (NYSE:). is neutral about Hong Kong’s stock-market performance next year. “The market has arguably priced the current environment. However, lack of visibility regarding the timing and path of a return to more normal conditions suggests a market weight stance,” strategists including Timothy Moe wrote in a research note.

Unlike Morgan Stanley, a slight further contraction in Hong Kong’s economy is expected next year at Goldman.

But Goldman said the earnings impact on companies in the MSCI Hong Kong Index should be “less than might be expected” as property firms account for nearly one-third of earnings reported by benchmark members. Big insurer AIA Group Ltd. generates an additional 20% of the total profit and conglomerate CK Hutchison Holdings Ltd. contributes 11%. Protest-hit “retail and hotels only account for 1% of earnings, so the passthrough of the weak economy to index earnings is muted.”

Also, Goldman said Chinese companies listed in the city may get some help from mainland investors, whose 2020 net buying of Hong Kong-listed stocks could jump 40% from this year’s estimate to $35 billion as more firms may offer shares in the city. Alibaba (NYSE:) Group Holding Ltd. last month held Hong Kong’s largest stock sale in nearly a decade at more than $11 billion.