Home
Stocks
Need to Know: This stock bear is waiting for one clear signal to jump back into markets
Prev Article Next Article
This post was originally published on this site

Stock market bears have had few breaks this year.

The S&P 500 SPX, +0.63%  has nabbed 26 record closes this year, while the Dow DJIA, +0.53%  counts 15, and pullbacks have often been quickly met by investors ready to buy. The pendulum swinging back toward more optimistic U.S.-China trade talk means a few more records could be reached in 2019.

Our call of the day comes from JonesTrading’s chief market strategist Michael O’Rourke, an unrepentant bear who sees little reason to dive in now, even if he has missed gains this year.

“We have been in an environment of deteriorating stock fundamentals, a weak global economy and a decelerating U.S. economy, against a backdrop of a historically expensive market,” he tells MarketWatch. Despite strong gains, the S&P 500 is just under 10% above its 2018 high, while the Russell 2000 RUT, +0.70%  is below its 2018 high.”

As for his call: “I will turn positive on the equity market when valuations are more attractive and aligned with economic and earnings growth.”

What has happened in the past couple of years is that company earnings growth has been “artificial,” driven by the administration’s tax cuts, he argues. That should mean that investors should assign a lower valuation, but they aren’t doing that, which is “dangerous.”

“I will become more constructive on the equity market as it begins to approach that historic 15x to 16x earnings multiple within a stable economic environment,” says O’Rourke. And right now, the forward price/earnings ratio—a popular method of valuing a stock’s worth—for the S&P 500 is right around 20.

Does he regret missing out on the stock’s gains? “I have a long-term process that is intended to be bullish when there is tremendous long-term opportunity and bearish when there is notable long-term risk,” O’Rourke said. He believes the Federal Reserve’s lengthy accommodative monetary policy has skewed business and investment cycles.

Look for the S&P 500 to rally to 3,200 and up in the first half of next year, say JP Morgan strategists Jason Hunter and Alix Tepper Floman, who provide our chart of the day. 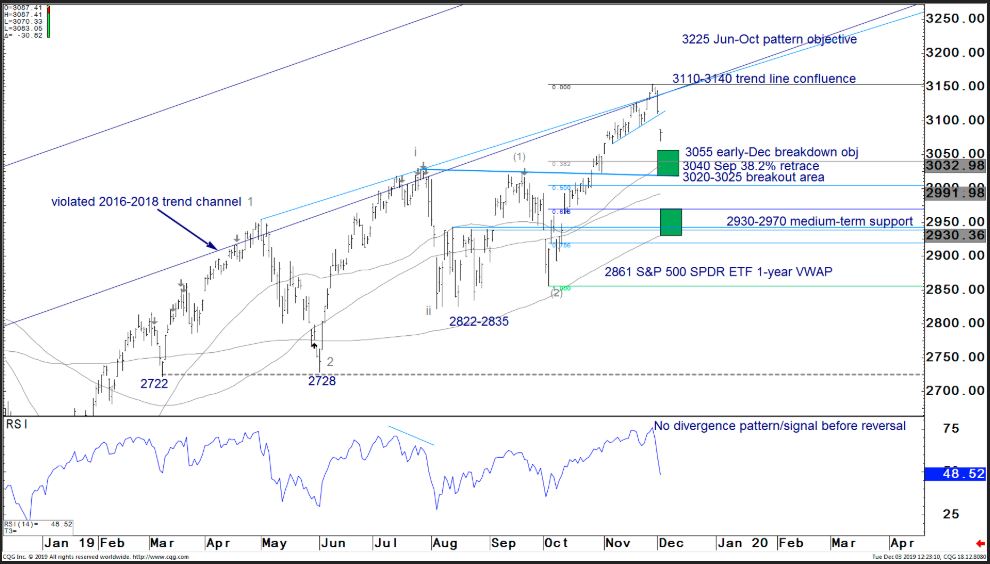 They don’t think bears have a grip on this stock market, despite the pullbacks triggered by geopolitical headlines this year. Investors will likely get tempted into the market around the support level of 3,020 to 3,055, says the team.

In the latest on trade, China says Washington must roll back tariffs if the two sides want to reach a deal.

The Federal Trade Commission is widening an Amazon AMZN, -0.52%  probe to include its cloud services unit, reports Bloomberg. Neither side would comment on the article.

Saudi Aramco may become the world’s biggest IPO, if the energy group prices shares at the top end of an expected range.

A day ahead of U.S. payrolls data, we’ll get jobless claims and the trade deficit, followed by factory orders.

A U.S. sailor kills two people and himself at Pearl Harbor shipyard.

Strikes and protests over the government’s retirement reforms paralyze France.

This art auction is literally bananas.