Home
Stocks
In One Chart: This bleak chart makes scary reading for all home buyers
Prev Article Next Article
This post was originally published on this site

Notably, the median age has increased by eight years since the financial crisis. Much of this rise can be attributed to the disappearance of young, first-time home buyers from the housing market.

Notably, the median age has increased by eight years since the financial crisis. Much of this rise can be attributed to the disappearance of young, first-time home buyers from the housing market. 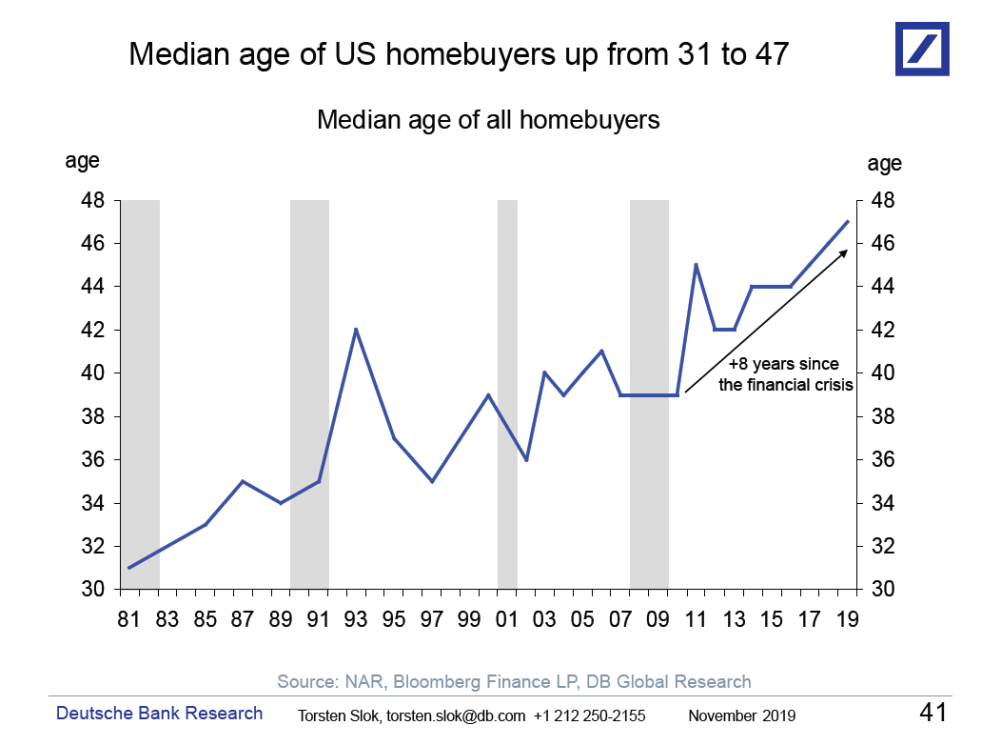 In larger U.S. cities that have proved more popular with today’s young adults, home prices have skyrocketed. Inventory is a significant challenge: Baby boomers are increasingly choosing to age in place, while home builders have focused primarily on the upper end of the market since the Great Recession.

The average annual income of home buyers has increased to over $93,000 in the wake of the affordability crisis, according to the National Association of Realtors. That’s well above the national median income of $61,937.

Read more: These housing markets will feel the biggest impact from the ‘Silver Tsunami’

Younger adults are also struggling under the weight of student debt. A 2017 study from the National Association of Realtors and education-financing nonprofit American Student Assistance found that 83% of non-home owners said they believe that student-loan debt has delayed them from buying a home.

That figure was higher among the older cohort of millennials who were born between 1980 and 1989. That same report indicated that student debt was causing millennials to delay home ownership by a median of seven years.

And those heavy debt loads can make it more difficult to get a mortgage for a home. “No one talks about this anymore, but it’s still really hard to get a mortgage,” said Nela Richardson, investment strategist at Edward Jones. “You need to have pristine credit.”

Read more: Here’s one thing you should be shopping for this holiday season

Other factors are also at hand beyond the financial. Millennials have delayed marriage and having kids, for instance, which are milestones that tend to lead to people buying homes.

Delaying home ownership could have unfortunate ripple effects in the future, as owning a home is one of the primary drivers of wealth.

Matters may, however, improve in the years to come. TransUnion TRU, -0.06%  has predicted that at least 8.3 million first-time home buyers will enter the mortgage market between 2020 and 2022, thanks in part to low unemployment, low mortgage rates and rising wages.

And research has suggested that the demand to own a home remains extremely high among Generation Z, the generation that follows millennials.