Home
Market
Amazon's rising air shipments fly in the face of climate plan
Prev Article Next Article
This post was originally published on this sitehttps://i-invdn-com.akamaized.net/trkd-images/LYNXMPEFA51QN_L.jpg 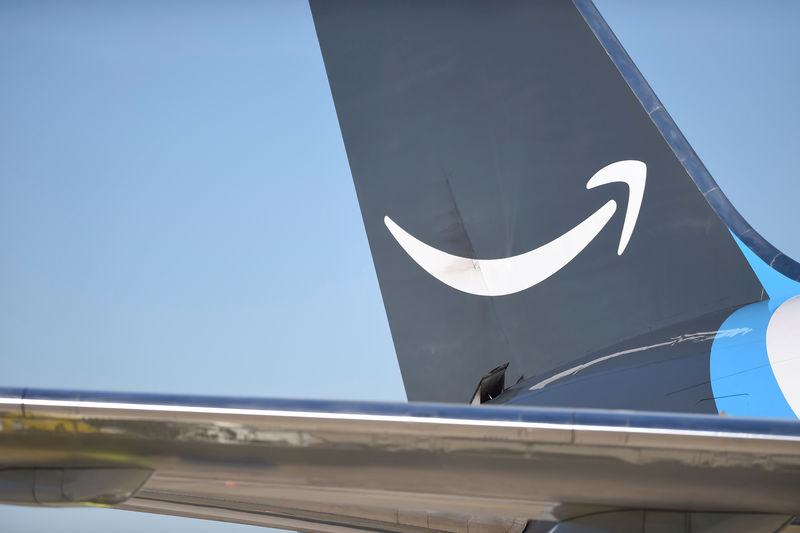 Yet the company’s use of airplanes – the most climate-damaging mode of transportation – is on the rise, according to data provided to Reuters.

Amazon Air’s U.S. volume has risen steadily since its 2016 launch, according to an analysis of Department of Transportation data by Cargo Facts Consulting https://www.cargofactsconsulting.com, a Luxembourg-based advisory firm with a global staff and more than four decades of history.

In July, Amazon Air flew 136 million lbs of goods in the United States, according to the data. That was up 29% from the year earlier and just 9 million lbs short of December 2018, when the peak holiday shipping season was in full swing.

Bezos has said Amazon will cut its use of airplanes as it builds more local warehouses and fills them with goods that it can deliver to customer doorsteps in one day, or even one hour.

But for the time being, Amazon’s air shipments are climbing as it speeds up deliveries to lure customers and pressure rivals like Walmart (NYSE:) Inc and Target Corp. (NYSE:)

In the latest quarter, it saw delivery costs soar, and warned the holiday quarter would see costs for one-day shipping alone spike to $1.5 billion.

The Seattle e-retailer, which sends 10 billion packages a year, declined to say what percentage of its shipments travel by plane or give specific examples of how the latest drive to shave time off its standard two-day shipping affected air transport.

“We expect the percent of total shipments to customers utilizing air transportation to reduce from year to year as we significantly increase one and same day shipments,” Amazon spokesman Sam Kennedy said, when asked about Cargo Facts’ data.

A standard package flown on a plane in the United States creates an estimated 6-10 times more CO2 emissions than one traveling by truck, said Jacques Leonardi, a senior research fellow in freight, logistics and sustainable distribution at the University of Westminster in London.

Amazon Air leases 47 planes and is expected have 50 by the end of the year. It operates roughly 110 daily flights in the United States and around 20 per day in Europe, according to Cargo Facts.

In June, shortly after FedEx Corp (NYSE:) said its planes would stop shuttling packages for the online retailer, Amazon Air announced plans to have 70 planes on lease by 2021.

But Amazon says it is getting closer to customers with an expanding network of well-stocked warehouses. Those local fulfillment centers underpin the company’s one-day and same-day delivery services.

In a news release issued Monday, Amazon said those options were “better for the planet” because there aren’t many miles in the trip to customer doorsteps.

Because those time windows are so tight, “you are eliminating the possibility of air transportation,” Amazon’s Bezos said in September. “Even though it’s counterintuitive, the fact of the matter is that shorter delivery times end up being less carbon-intensive than longer delivery times.”

Products from most of Amazon’s 158 U.S. distribution centers can be shipped to 65% of the population in one day, said Marc Wulfraat, president of supply chain consultancy MWPVL International.

Items like footwear, jewelry, auto parts and niche electronics come from 23 distribution centers that span the country – and will likely need to be moved by air for next-day delivery, Wulfraat said.

Domestic next day air volume at UPS surged more than 30% in the second quarter and was up nearly 24% in the third quarter – fueled by faster e-commerce shipping speeds and rival FedEx’s breakup with Amazon this summer.

“It’s not all from FedEx,” said Satish Jindel, the founder of logistics advisory firm ShipMatrix, noting that express and deferred air services revenue at UPS surged $852 million in the second and third quarters.

Amazon’s business was worth about $900 million to FedEx prior to their split, Jindel said. Express, which includes air shipments, accounted for roughly $540 million of that, he said.