Home
Market
Several automakers back Trump in two other California vehicle emissions suits
Prev Article Next Article
This post was originally published on this sitehttps://i-invdn-com.akamaized.net/trkd-images/LYNXMPEFA023J_L.jpg 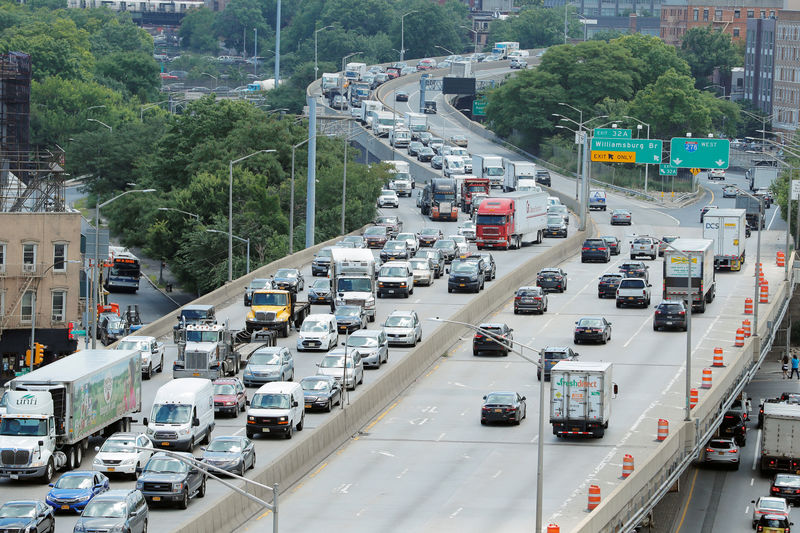 © Reuters. Traffic backs up on the Brooklyn Queens Expressway in New York

The two lawsuits, brought by California and 22 other states and environmental groups in September in U.S. District Court in Washington, challenge the administration’s determination in September that California cannot set vehicle emission standards and zero-emission vehicle mandates.

Late Monday, the automakers and dealers sought to intervene in a separate suit filed with the U.S. Court of Appeals for the District of Columbia by an environmental group, saying they backed the administration’s bid to prohibit states from making their own emissions rules.

The decision to side with President Donald Trump brought thanks from the president on Wednesday and prompted a furious backlash from Democrats and environmentalists.

It also poses a risk for the automakers if a Democrat wins the White House in November 2020 and reverses Trump’s actions, allowing California to set its own rules and revert to the tougher national emissions standards of the Obama era.

Other automakers, such as Ford Motor Co (N:), Honda Motor Co (T:), BMW AG (DE:) and Volkswagen AG (DE:), which announced a voluntary deal with California in July on emissions rules, are not intervening on the administration’s side.

The automakers suing include all of the Association of Global Automakers members except Honda, and several Alliance of Automobile Manufacturers members – but not Ford or its German automaker members, including VW.

The split comes as the two major auto trade associations have been in merger talks for months. They recently voted to conduct due diligence as they try to finalize a tie-up in coming weeks, four senior automotive officials told Reuters.

Alliance of Automobile Manufacturers spokeswoman Gloria Bergquist said late Thursday the groups “have collaborated on many projects over the years and we are exploring working together even more closely now, but we don’t have anything to announce yet.”

The Obama-era rules adopted in 2012 called for a fleetwide fuel efficiency average of 46.7 miles per gallon by 2026, with average annual increases of nearly 5%, compared with 37 mpg by 2026 under the Trump administration’s preferred option.

The final rule is expected to modestly boost fuel efficiency from the initial proposal, with several automakers anticipating annual increases of about 1.5%, but still much less stringent than the Obama rules. An administration official said Thursday the rule is not final and could change before the end of the year.