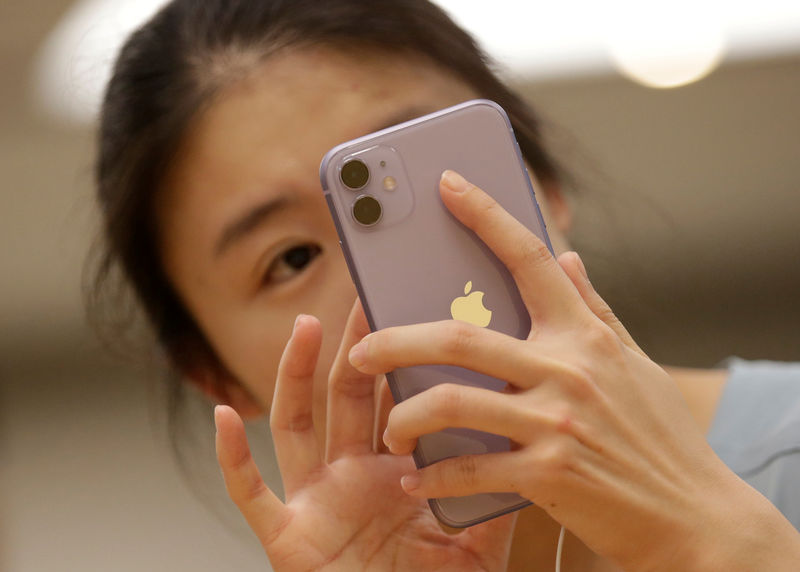 SHANGHAI (Reuters) – Apple Inc (NASDAQ:) managed to largely stem a fall in China revenue in the September quarter thanks to the release-timing of the iPhone 11, a cheaper variant, and a bit of good luck, but analysts said the company’s good fortunes might be shortlived.

Apple said sales in greater China fell 2.4% in its fourth quarter ended Sept. 30, a far cry from the 27% drop it saw in the first quarter this year – a fact that Chief Executive Tim Cook played up on the company’s post-earnings call on Wednesday.

A confluence of things helped.

The company priced the cheapest variant of its iPhone 11 at $50 less than the last generation model, even as it pulled in the launch of the new models by a month versus last year, which helped sales in the September quarter.

This followed a year of heavy discounting on older iPhone models as Apple gave resellers flexibility to cut prices, contrary to past practice. As well, the company recently introduced installment-based payment plans to push sales in a weaker economy and a contracting smartphone market.

But the company is expected to launch a 5G-enabled smartphone only next year, which analysts say is a problem when Huawei, China’s top smartphone maker, launched its first 5G phone in June – the Mate 20 X, priced at 6,199 yuan ($901).

Yan expects cheaper 5G devices from these companies to flood the market in China next year, pushing down Apple’s sales.

Huawei cornered the lion’s share of the China market in the July-September period, according to market research firm Canalys, leaving Apple toward the bottom of the pile.

The September quarter was indeed an improvement for Apple in China.

Services revenue – which the company has been touting as a growth driver as iPhone volumes plateau – rose by double digits in China as more iPhone users downloaded games on the App store, after regulators continued to approve games following a months-long ban.

Chinese authorities approved 291 domestic and imported titles for in-app purchases in July-September, pushing up downloads of popular titles including Tencent’s Battle Through The Heavens and NetEase’s Pro Evolution Soccer.

Nicole Peng, who tracks China’s smartphone industry at Canalys, said the rise in Apple’s services revenue is also testament to the fact that Chinese consumers are getting more used to paying for online content.

“Even on Android and WeChat, a lot more content requires users to pay membership or subscription fees,” she said.

Peng also noted that an option to trade-in older models was featured more prominently on Apple’s China website this year and retail staff have been pushing the service to customers.

In the past, faced with a trade-in choice, “Chinese consumers would ask, ‘Why would I want to trade in my phone? Are you saying I don’t have enough money to buy it?'” she said.

But domestic resellers such as Aihuishou, Huishoubao and Alibaba’s used-goods site Xianyu, have helped consumers who might have switched to cheaper Android phones understand that the cost of an iPhone can be offset.

“For Apple, it was the right time to get these better-educated customers to use their trade-in services.”