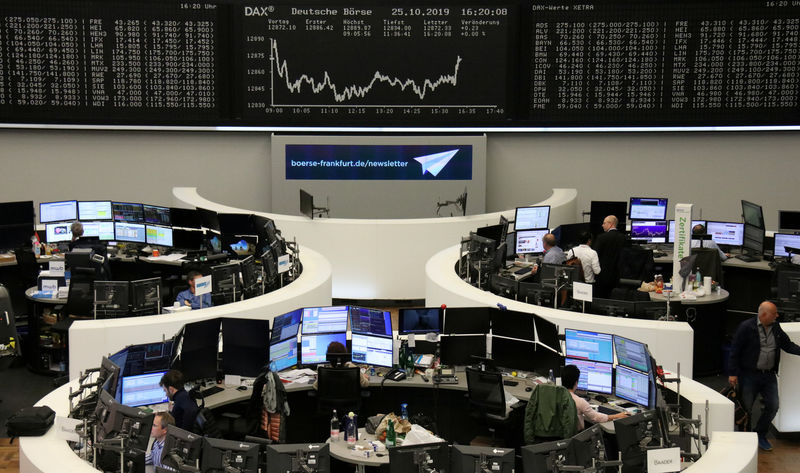 (Reuters) – European shares reversed course to trade lower on Thursday after China said it doubts a long-term trade deal is possible with the United States, tempering gains that came earlier in the day after the Federal Reserve cut interest rates.

A Bloomberg report said that China is doubtful of a long-term trade deal with U.S. President Donald Trump, raising fresh uncertainty about trade progress between the two countries after an interim trade deal was almost finalized.

By 0950 GMT, the pan-European STOXX 600 index () moved 0.5% lower, but was on track to end higher in a busy month of earnings peppered with some Brexit and trade twists.

“In terms of a long term deal, the relationship between China and the United States is fundamentally problematic,” Teeuwe Mevissen, senior market economist at Rabobank, said. “The trade war is here to stay.”

Twists in the tit-for-tat trade war between the world’s two largest economies have kept financial markets on edge with global growth taking a toll.

Apart from the trade drama, there was plenty of action in earnings with energy heavyweight Royal Dutch Shell (L:) down 2.5%, after warning that uncertain economic conditions could slow its $25 billion share buyback plan.

Another set of disappointing numbers came from carriers with Air France-KLM (PA:) down 5%, after it said slowing travel demand is likely to hurt ticket sales in the remainder of 2019.

British Airways owner IAG (L:) said industrial action from pilots at the airline had knocked down its third-quarter profits.

In the auto sector, a deal between Fiat Chrysler (MI:) and Peugeot owner PSA (PA:) to create the world’s fourth-largest automaker lifted the shares of Fiat Chrysler 10%.

However, Peugeot owner PSA (PA:) fell 9%, after having risen nearly 5% in the last three sessions in the run-up to the deal.

Among positive movers in a gloomy market, shares of Dutch semiconductor supplier ASM International (AS:) rose 8% to top the STOXX 600 index after it forecast a rise in sales for the fourth quarter.