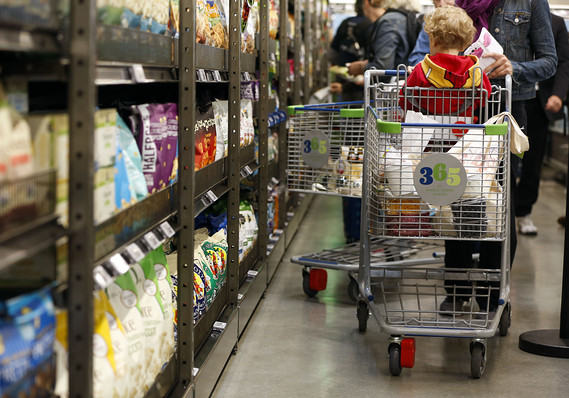 Consumers are spending more than enough to keep the economy growing and avoid a recession for the first time in more than 10 years.

The numbers: Americans increased spending in September for the seventh month in a row but did so at a more moderate pace, keeping the economy expanding at a steady, if unspectacular, rate.

Consumer spending rose 0.2% last month, the government said Thursday. That is a touch below the 0.3% MarketWatch forecast.

Taking advantage of rising incomes and falling interest rates, consumers boosted spending by a robust 2.9% in the third quarter after a heady 4.6% increase in the spring. They have kept the economy moving forward even as businesses scale back.

A key barometer of inflation, meanwhile, was unchanged in September. The Federal Reserve on Wednesday cited low inflation as one of the reasons it cut interest rates for the third time this year in as many meetings.

What happened: Americans spent more on new cars and trucks in September. Falling interest rates have made it less expensive to buy big-ticket items such as automobiles or homes. Spending on health care also increased.

What’s enabled households to keep spending are steadily rising incomes, an offshoot of the tightest labor market in half a century. Incomes rose 0.3% in September.

At the same time, though, many households are trying to sock some money away. The savings rate moved up to 8.3% from 8.1%, keeping it near a postrecession high. Fewer Americans are spending beyond their means, compared with a decade ago.

Inflation, for its part, poses little threat to costs for consumers.

The Fed’s preferred inflation barometer known as the PCE, or personal-consumption expenditures, index was flat in September on both an overall and core basis, which excludes food and energy prices.

The 12-month rate of inflation slowed to 1.3% from 1.4% — well below the Fed’s 2% target. That matches the reading in February as the lowest in three years. 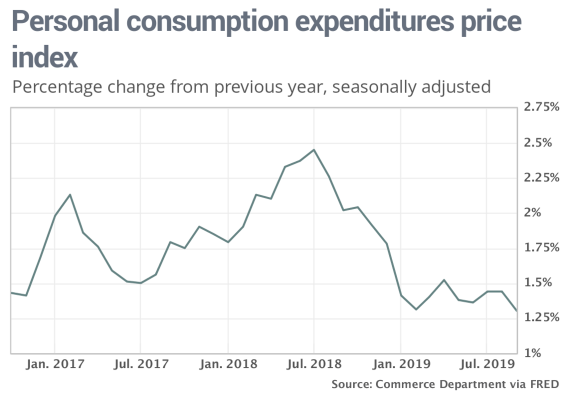 The more closely followed core measure dipped to a 1.7% yearly rate from 1.8%.

Big picture: The story of the longest economic expansion in American history is being written these days by strong consumer spending. Outlays have risen sharply for two quarters in a row, offsetting a big decline in business spending and investment.

Companies have scaled back production and hiring in response to slower sales and profit growth. The trade war with China and a teetering global economy have added to the angst.

The U.S. economy should be OK, however, so long as businesses avoid mass layoffs. Consumers are still confident because they still have jobs — unemployment has fallen to a 50-year low.

Market reaction: The Dow Jones Industrial Average DJIA, +0.43% and S&P 500 index SPX, +0.33% were set to open modestly lower in Thursday trades. The S&P carved out a fresh record close on Wednesday after the Fed decision.