The 2020 Acura NSX might be the most affordable and reliable exotic sports car on the planet. Designed to chase down pricier supercars like the Lamborghini Huracan, the Ferrari 488 and the Ford GT F, -1.16%  , the NSX combines brilliant styling with an advanced suspension that delivers tenacious cornering abilities. Hand-built in the U.S. by a team of master technicians, the NSX is remarkably affordable considering the company it runs with.

The NSX’s hybrid powertrain is one of the most advanced powertrains ever assembled. Its turbocharged V6 engine is assisted by three electric motors: one placed between the engine and transmission and the other two powering the front wheels. The hybrid powertrain produces a remarkable 573 horsepower and 476 lb-ft of torque. A 9-speed dual-clutch automatic handles the power, aided by an electric Direct Drive Motor sandwiched between the engine and transmission that powers the NSX’s lightning-quick acceleration. 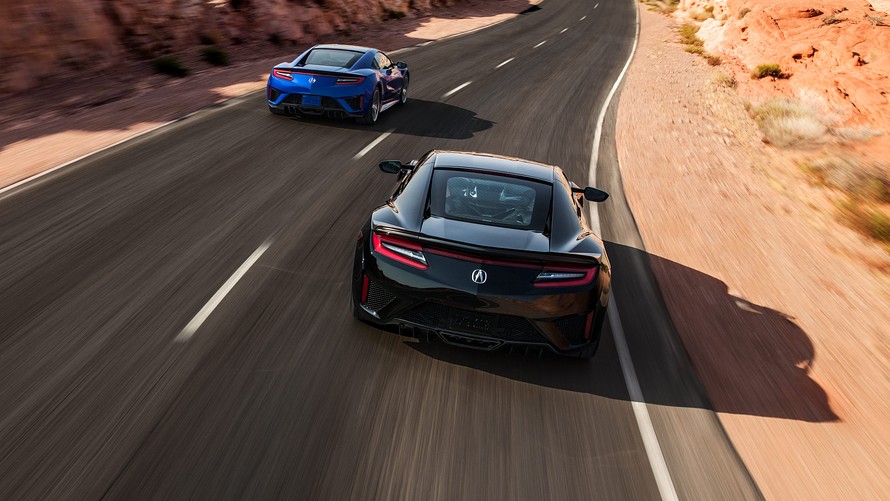 You could be quite happy in your daily commute in the NSX.

Capable of sprinting to 60 mph in just three seconds and reaching a top speed of 191 mph, the all-wheel-drive NSX easily plays in the same league as the Audi R8 V10 and the Chevrolet Corvette Stingray, not to mention the McLaren 570S and the Porsche 911 Turbo.

There’s a new paint color, Indy Yellow, that pays homage to the original NSX’s popular Spa Yellow paint, which was offered between 1997 to 2003. See the 2020 Acura NSX models for sale near you

Fuel economy for the NSX is rated at 21 miles per gallon in the city and 22 mpg on the highway — not bad considering the performance behind this wild ride.

The 2020 Acura NSX comes in only one trim, but it can be augmented with myriad performance and styling enhancements.

Options for the NSX include full leather seating, carbon fiber add-ons for the interior, roof and rear spoiler and a range of exterior paint choices. Buyers can cut the car’s weight by ordering manual seats, and there are a number of wheel options, too. For an additional $10,000, buyers can order a carbon-ceramic brake upgrade, while $6,000 gets you one of two Andaro paint colors: Velencia Red Pearl or Nouvelle Blue. Upgrading to the interior and exterior Gloss Carbon Fiber Sport packages will run you $12,600.

Although the NSX lacks modern driver-assistance features such as adaptive cruise control, autonomous emergency braking and semi-autonomous driving, it still comes with a full roster of safety features, including electronic traction and stability control, front- and side-impact airbags, a driver’s-knee airbag, a rearview monitor and a tire pressure monitor.

Neither the U.S. National Highway Traffic Safety Administration nor the independent Insurance Institute for Highway Safety crash-tested the NSX.

As would one expect of any supercar, the NSX is as thrilling in motion as it is standing still. Clambering into the low-slung cockpit isn’t as easy as gliding into an SUV, but once you’re in, it’s all systems go. The seats are snug but not too restrictive, and the controls are logically arranged and easy to operate. The headroom is far from generous, and taller drivers might find the legroom a bit on the snug side. 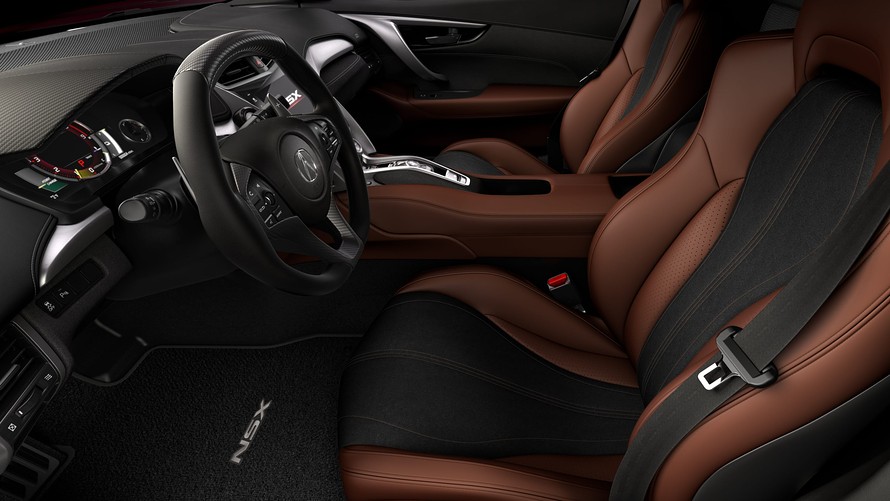 The seats are snug but not too restrictive.

A quick push of a button is all it takes to bring the NSX’s twin-turbocharged V6 to life. Pressing the push-button gear selector sets everything in motion with varying degrees of urgency, depending upon the position of the Integrated Dynamics System. Using a large rotary knob just above the gear selector, the driver can choose from four modes: Quiet, Sport, Sport+ and Track. Each setting is fairly self-explanatory, but our favorite is Sport+, which delivers just the right balance of performance and comfort required for spirited drives. The active torque vectoring system, when combined with the Super Handling All-Wheel Drive and grippy Continental tires, makes the NSX feel as though it’s riding on rails. A quick punch of the accelerator launches the car to 60 mph in a mere three seconds, and it continues without lagging right up to its 191 mph limit. That kind of power can only come from the instantaneous torque provided by the electric motors, and it’s intoxicating.

You might expect the normal hybrid system’s regenerative braking to sap some of the joy out of the NSX, but such worries are unfounded. We found the NSX to be one of the more enjoyable high-performance cars — not because of the brilliant way it attacks curves and makes even the most nefarious test track seem like child’s play, but because it’s so darn civilized when driving around town. You could have the NSX as your only car and be quite happy with your daily commute. You could even fit a set of golf clubs in the rear cargo bay, just behind the engine.

Is the NSX the world’s best supercar? No, but it does rank up there with the most elite, including the McLaren 570S, the Audi R8 V10 and the Porsche 911 Turbo, which all fall in the NSX’s price range.

Other cars to consider

2020 Chevrolet Corvette Stingray — The all-new 2020 Corvette Stingray is a stunning midengine performer with a torque-happy V8. At 495 hp, the Corvette isn’t as powerful as the NSX, but it can still bolt to 60 mph in three seconds, and its $60,000 starting price is less than half the price tag of the NSX.

2020 Audi R8 V10 — The Audi R8 V10 shares many of its components with the Lamborghini Huracan. It’s a refined machine with more horsepower than the NSX, but its performance times are similar. The R8’s cockpit feels more refined and high-tech, but its fuel economy isn’t nearly as good.

2020 Porsche 911 Turbo — The 911 Turbo holds more clout than the NSX, and it also makes for a very livable daily driver. Its performance is a bit more visceral, too, with a faster 0-to-60 mph time, a more polished interior and more personalization options.

We like the NSX’s $160,000 entry price and wouldn’t push it up too much by adding on things like the carbon fiber bits and upgraded interiors, which don’t enhance performance. Toss in the carbon-ceramic brake package and the manual seat adjusters and call it a day.