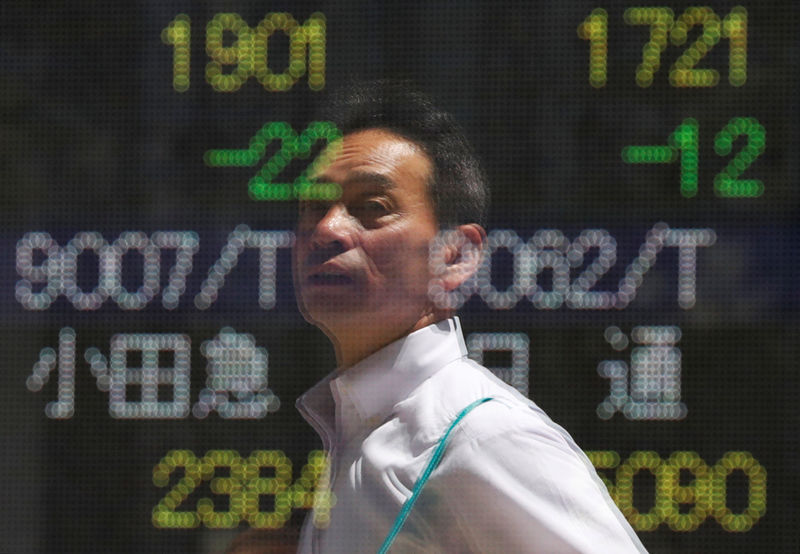 © Reuters. A man is reflected on a stock quotation board outside a brokerage in Tokyo

TOKYO (Reuters) – Asian shares jumped on Thursday to a three-month high and the dollar fell broadly after the Federal Reserve cut interest rates as expected and U.S. Treasury yields declined.

MSCI’s broadest index of Asia-Pacific shares outside Japan was up 0.53% to the highest since July 30. Hong Kong shares rose 0.93%, while Japan’s stock index rose 0.43%.

U.S. Treasury yields slipped after the rate cut, but Fed Chairman Jerome Powell signalled additional trims are unlikely because there are several areas of strength in the U.S. economy.

The yen held onto gains versus the dollar after the Bank of Japan keep its ultra-easy monetary policy in place as expected and changed its forward guidance to more clearly signal the future chance of a rate cut.

Debate at the Fed and the BOJ highlights the struggle that many central banks are facing.

The U.S.-China trade war and Britain’s divorce from the European Union have increased uncertainty, but central banks are somewhat reluctant to ease policy aggressively because interest rates are already very low in many major economies.

“The biggest thing that stands out is stocks look stronger after the Fed,” said Tsutomu Soma, general manager of fixed income business solutions at SBI Securities in Tokyo.

“Risks like U.S.-China or Brexit haven’t been resolved completely, but the markets are starting to look beyond these risks.”

U.S. stock futures edged 0.01% lower on Thursday after the rose 0.33% to close at a record high on Wednesday for the second time in three trading sessions.

A positive mood on Wall Street carried over to Asian equities, except for Australian shares, which fell 0.39% after weak earnings from Australia and New Zealand Banking Group.

The Fed lowered its policy rate to 1.50%-1.75%, but dropped a previous reference in its statement to “act as appropriate” to sustain the economic expansion.

In his news conference, Powell listed several reasons why he feels the economy is doing well, such as robust consumer spending, strengthening home sales, and healthy asset prices.

The against a basket of six major currencies fell 0.31% to 97.346, extending declines from Wednesday.

News that Chile will not host the Asia-Pacific Economic Cooperation (APEC) summit in mid-November was one reason the dollar was dented – as the market has been expecting the United States and China to sign a partial trade deal there.

On the brighter side the head of a Chinese government-backed trade group said Beijing could remove extra tariffs to allow importers to buy up to $50 billion worth of U.S. farm products.

The greenback fell to 7.0417 yuan in onshore trade, at one point falling to its lowest since Aug. 19.

The yen rose 0.16% to 108.68 per dollar, holding onto gains after the BOJ left policy unchanged as expected.

Traders will focus on BOJ Governor Haruhiko Kuroda’s press conference later on Thursday to gauge how he assesses the risks posed by the U.S.-China trade war and Brexit.

Optimism that Washington and Beijing will sign a preliminary agreement to call a truce to their trade war was a factor behind the Fed’s decision to signal that further rate cuts are on hold, highlighting the importance of trade talks to global monetary policy.

In the energy market, oil futures erased loses and rose on Thursday after as a massive buildup in stock piles triggered a decline in futures on Wednesday.