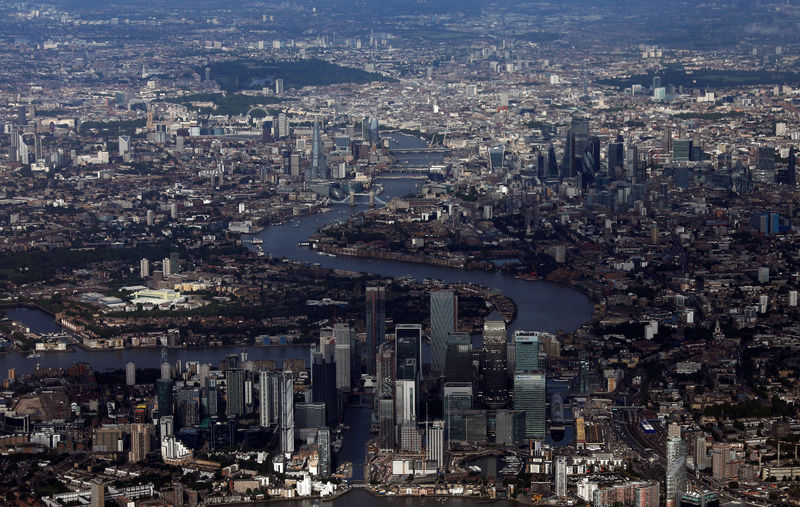 © Reuters. Canary Wharf and the City of London financial district are seen from an aerial view in London

LONDON (Reuters) – Banking in Britain paid 40 billion pounds ($52 billion) in taxes in the last financial year with half from foreign lenders, underscoring the need for a government rethink on taxes to keep London competitive after Brexit, UK Finance said on Wednesday.

Banks and their employees paid a total of 39.7 billion pounds in taxes, or 5.5% of government receipts, unchanged from the prior year, UK Finance said in a review compiled by consultants PwC (see graphic).

The tax raised was roughly split between those paid by employees, and the corporate tax, surcharge on profits and balance sheet levies paid by the lenders themselves.

The surcharge and levies were introduced after Britain had to bail out lenders with public money during the financial crisis a decade ago.

Britain’s “fiscal competitiveness” has declined relative to other global financial centres like New York, where banks have benefited from recent cuts in corporate taxes, the review said.

Many banks operating in Britain have opened European Union hubs in cities like Frankfurt to ensure continuity of service for EU customers after Britain leaves the bloc.

Banks are moving about a trillion euros in assets from London to their new subsidiaries, which is likely to lead to a loss of some UK tax revenue.

“In this context, maintaining fiscal competitiveness is more important than ever,” the review said.

“This is also vital to ensure a healthy domestic banking market which can continue to provide credit to support future growth of the UK economy.”

The review also showed a fall in headcount at UK-headquartered banks due to restructuring, and customers using online and mobile banking.

While foreign-heaquartered banks hired more staff, this was due to getting ready for Brexit, implementing IT changes and mergers, and is unlikely to be indicative of the long-term trend, the review said.