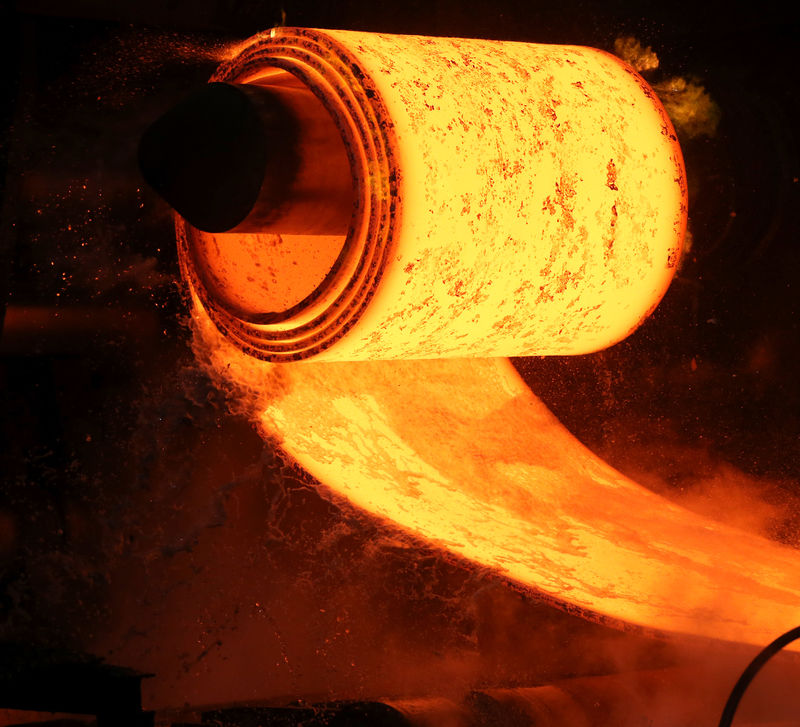 © Reuters. Water runs off a steel coil as it is unrolled on the line at the Novolipetsk Steel PAO steel mill in Farrell, Pennsylvania

WASHINGTON (Reuters) – Lack of transparency in the Commerce Department’s handling of steel and aluminum tariffs raised the appearance that certain companies may have had “improper influence” in the process, its internal watchdog said in a document made public on Wednesday.

The Commerce Department’s inspector general (IG) said it uncovered multiple risks during an audit of processes used by two agencies within the department – the Bureau of Industry and Security (BIS) and the International Trade Administration (ITA).

The audit related to the way companies were able to request that they be exempted from having to pay 25% tariffs on imported steel and 10% tariffs on imported aluminum, that were imposed by U.S. President Donald Trump in March 2018, under Section 232 of the 1962 Trade Expansion Act.

It found evidence that the department had an unofficial appeals process; changed its internal review criteria after communicating with a company that objected to an earlier decision; and failed to fully document more than 100 meetings and phone calls with interested parties.

“We believe that these issues give the perception that the Section 232 exclusion request review process is neither transparent nor objective,” the IG’s office said in a management alert dated Oct. 28 and made public Wednesday. It said the findings contributed to “the appearance of improper influence in decision-making for tariff exclusion requests.”

Democratic presidential candidate Elizabeth Warren, who had asked the IG to review the exclusion review process, hailed the report as evidence “that the Trump administration’s tariff exclusion process was rigged from the start to benefit big, well-connected, and in many cases, foreign-owned companies.”

Warren, a senator from Massachusetts, requested the IG review in August 2018 after discovering that Rusal, a subsidiary of a sanctioned Russian company, had received an exemption. Her office said it found that the overwhelming majority of exemptions from the tariffs had gone to the U.S. subsidiaries of foreign-owned companies rather than U.S.-headquartered firms.

Representative Jackie Walorski, a Republican from Indiana and fierce critic of the department’s handling of the exclusions process, said the IG’s findings showed the administration had “a thumb on the scale favoring objectors.”

“There is no excuse for allowing an opaque, inconsistent, and unfair process to continue harming American manufacturers,” she said in a statement.

Companies can request exemptions from the Section 232 tariffs for certain products if they are not available domestically. The exclusions are made on a case-by-case basis, but other companies can object to the exclusions being granted.

The Commerce Department has received over 135,000 exclusion requests and 43,000 objections, according to a letter from the department to Walorski that was seen by Reuters.

The IG’s office said Commerce should make the process more transparent by setting up a formal appeals process, creating a process for modifying internal criteria for judging exclusion requests, and documenting discussions with interested parties.

The Commerce Department said it had already taken key steps to “safeguard” the system, including hiring dozens of contractors, an online portal for requests, a “robust rebuttal process” and guidance for communications with stakeholders.