Home
Stocks
The Tell: Dividend stocks may be cheaper than you think despite a recent rally, say experts
Prev Article Next Article

Investors scrambling for investments that tout attractive yields, along with fears of a looming economic slowdown, have combined to helped buoy sectors that traditionally pay rich dividends but don’t necessarily see powerful stock-price gains, like the utilities, real estate and consumer staples.

However, despite the outperformance of those sectors thus far — the Utilities Select Sector SPDR Fund XLU, +0.63%  has risen 8.5% during the past six months, versus a 3% rise for the S&P 500 index SPX, -0.05%  — the advance hasn’t made dividend-paying equities on the whole particularly expensive, according to an analysis by Ed Clissold, chief U.S. strategist at Ned Davis Research.

Check out: These stocks have the highest dividend yields in the hot real-estate sector

Read: 3 dividend stock picks with yields as high as 12% from a manager who doesn’t focus on dividends

Clissold wrote that the Fed’s reversal from a policy of higher interest rates late last year to multiple interest-rate cuts in the second half of 2019 has helped to push government bond yields to three-year lows. “As a result, 62.5% of stocks have dividend yields greater than the 10-year U.S. Treasury TMUBMUSD10Y, -1.77%  the third-highest reading in the last 50 years,” he wrote. “Once again the Fed is forcing income investors into the stock market.” 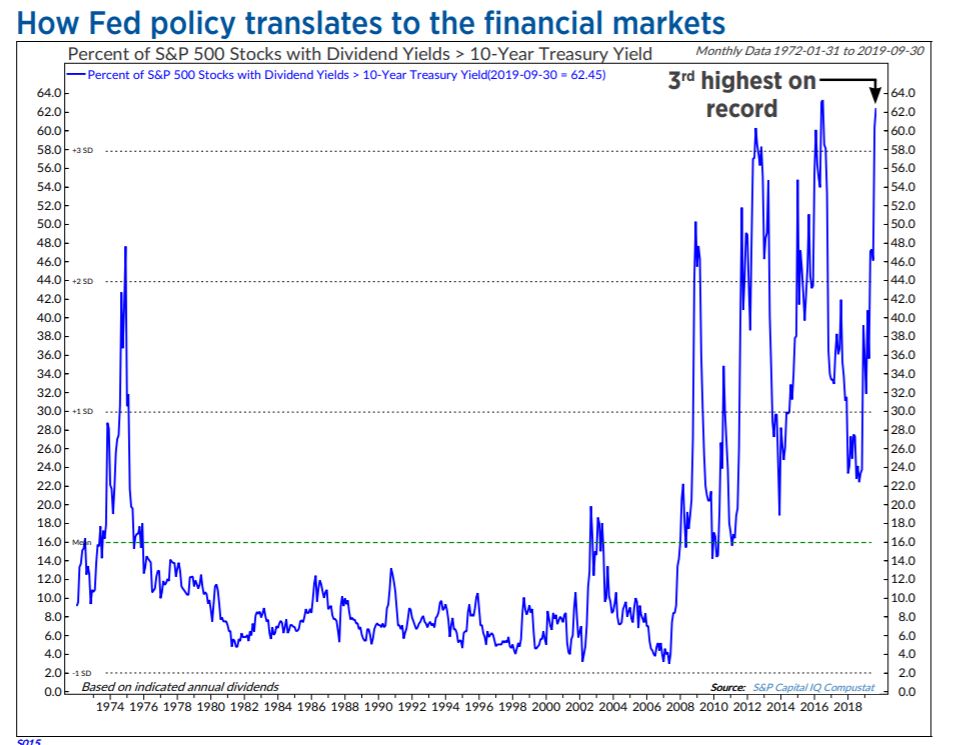 And government debt offering yields of less than 0%, meaning investors pay for the privilege of parking their money, stand at around $15 trillion, according to recent reports.

The last time interest rates fell to levels seen in recent weeks, back in 2016, dividend-paying stocks became much more expensive. “Due to their lower expected growth rates, dividend paying stocks almost always have lower price-to-earnings (P/E) ratios than those of non-dividend paying stocks,” Clissold wrote. “But after seven years of extraordinarily easing monetary policy, in July 2016 the median P/E ratio of S&P 500 Dividend Payers was almost as high as the median P/E of Non-Payers.” 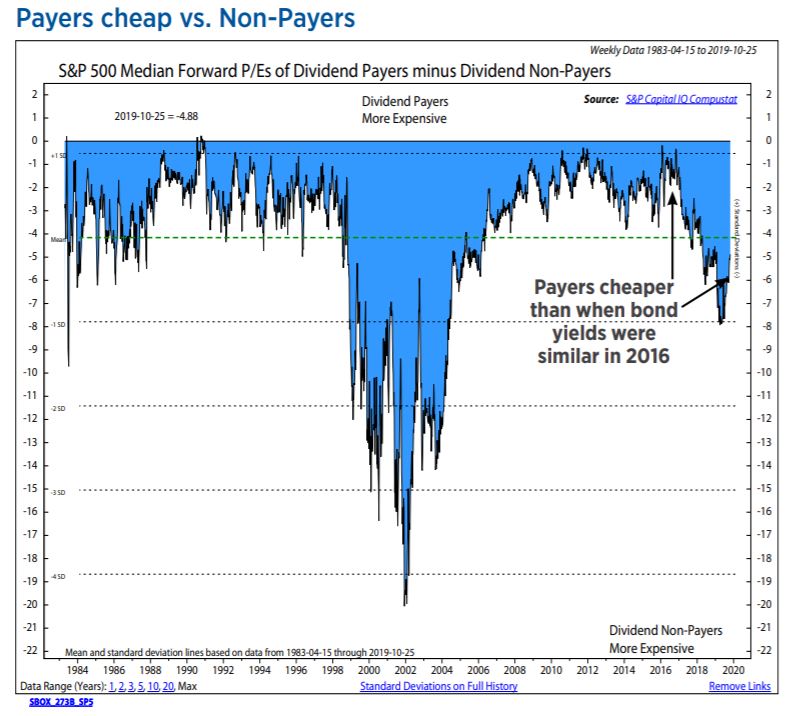 One reason dividend-paying stocks haven’t become more expensive relative to the rest of the market is that the rally in defensive stocks has led their dividend yields to fall as their stock prices rise. In their place, stocks in the energy sector have risen to the top of the dividend-yield leaderboard.

The energy sector has been the worst performing year-to-date of the 11 S&P 500 sectors, rising just 1.4% versus the 21% rise in the S&P. Concerns about oversupply of oil and natural gas, along with fears that the global economy is weakening, have led investors to flee these stocks, though they now trade at attractive valuations.

For instance, Occidental Petroleum Corp. OXY, -1.54%  now boasts a dividend yield of 7.5%, the fourth highest in the S&P 500, according to FactSet, after its stock has fallen roughly 32% year-to-date. Contract-drilling company Helmerich & Payne Inc. HP, -2.86%   maintains a 7.1% dividend yield, after losing about 20% of its stock value on the year.

The lesson to draw from this, Clissold wrote is “that macro and market conditions mean that the universe of high-dividend yielders may not be what investors believe them to be. As a result, dividend funds with different screening criteria can have vastly different sector weights.”