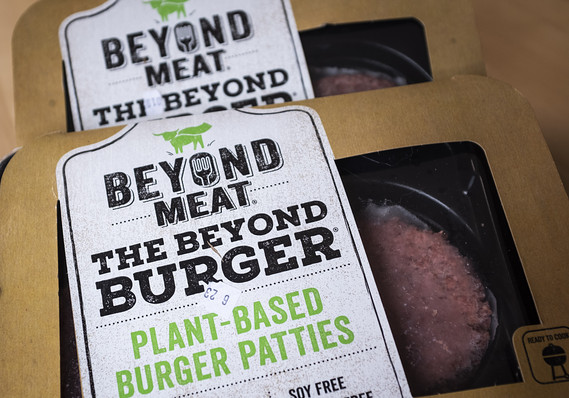 Beyond Meat stock is feeling the pressure from a number of factors, including the end of the stock lockup

Beyond Meat Inc. stock plummeted 22.2% in Tuesday trading with a few factors weighing on the stock, including analyst feedback indicating that the Canadian P.L.T. (plant, lettuce, tomato) trial at McDonald’s Corp. has not been met with a resounding response and the end to the stock lockup.

On the call, Chief Executive Ethan Brown talked up the food service partnerships Beyond Meat has entered into, particularly the ones with Subway, the largest restaurant chain in the world by the number of locations, KFC, a Yum Brands Inc. YUM, +0.19%   chain, Dunkin’ Brands Inc. DNKN, +0.95%  , which just expanded the Beyond Breakfast Sausage sandwich to 9,000 locations, and McDonald’s.

Brown also talked about the McDonald’s MCD, +0.44%   trial as the next step in reaching a target for the company.

“This important step reflects a dream becoming reality,” he said, according to a FactSet transcript of the earnings call. “We’ve long had our sights on ubiquitous availability for Beyond Meat, and years ago, I set a goal that my own children would be able to go to major fast food chains and order Beyond by the time they could drive.”

He said Beyond Meat is now available in 53 countries around the world.

However, as some analysts have already noted, just because McDonald’s is trying Beyond Meat doesn’t mean it will end up on the menu.

“Based on our channel checks with select McDonald’s based in Ontario, Canada that are currently testing the Beyond P.L.T. burger, the initial feedback has been largely positive, although it seems that the trial has not been a blowout success thus far that justifies an immediate nationwide rollout across both Canada and the U.S.,” Bernstein said.

And: Beyond Meat initiated at sell as large competitors make gains in plant-based food

And even if Beyond Meat is added to the menu, Bernstein analysts wonder whether the company can keep up with McDonald’s.

“At this rate of capacity expansion, we believe Beyond Meat will be able to keep up with demand growth at the current rate, although if the McDonald’s partnership materializes, Beyond Meat may need to structure the deal such that its products are rolled out on a regional basis at least initially in order to maintain service levels,” analysts wrote in a Tuesday note.

Bernstein rates Beyond Meat stock market perform and raised its price target to $106 from $100.

Seth Goldman, Beyond Meat’s executive chair, also addressed the end to the lockup.

“While we recognize short-term reactions to these milestones are often marked by heightened uncertainty, we believe that Beyond Meat is in a stronger position today than at any other time in its history,” he said on the call.

“Our transition to a public company has positioned Beyond Meat well to be able to capitalize on the substantial growth opportunities that lie ahead of us, and we sincerely thank our pre-IPO investors for getting us to this point and for their long-term commitment and belief in our company.”

Sensing those growth opportunities for their own companies, Tyson Foods Inc. TSN, +0.26%  ,Kellogg Co. K, +2.96%   and others have jumped into the plant-based meat category with their own brands.

“We do not interpret the interests and efforts of large companies to capture our leadership position as evidence that they will do so, any more than Amazon’s [ascent was] squelched by traditional retailers who entered e-commerce to unseat them,” Brown said.

“We continue to view Beyond Meat as perhaps the best growth story in staples,” wrote Jefferies analysts. “However even with the recent pullback, Beyond’s valuation at ~15.5X revenue sets a high bar for the stock, particularly with competition ramping up, topline momentum showing less upside versus loft Street expectations, and post-IPO lockup period expiring.”

Jefferies rates Beyond Meat shares hold, and slashed its price target to $115 from $190.

JPMorgan analysts also cut their price target, to $138 from $189, due to cuts in their revenue forecasts for 2025 and after. Analysts also question how many stockholders will sell their shares with the stock halved since its high point. The stock closed on July 26 at $234.90.

“[P]utting the lockup expiry in the past ultimately should incentivize some investors to start buying the stock again, though the shares could fade lower beforehand,” JPMorgan wrote.