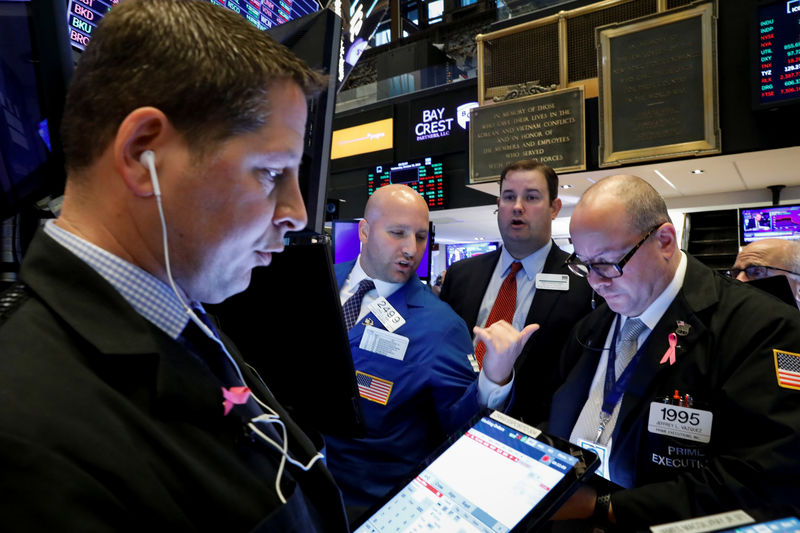 (Reuters) – The S&P 500 and the Dow Jones Industrials were flat on Wednesday as investors assessed mixed corporate reports, while bracing for a policy decision by the Federal Reserve later in the day.

Shares of General Electric Co (N:) jumped 9.5% after the industrial conglomerate beat quarterly profit estimates and raised its cash forecast for the year.

Yum Brands Inc (N:) shed 8% and was among the top decliners on the benchmark index as the KFC owner missed quarterly profit expectations.

The U.S. central bank is widely expected to cut interest rates for the third time this year to counter any fallout from a protracted trade war with China on the domestic economy.

The Fed decision is due at 2 p.m. ET followed by a news conference by Chair Jerome Powell.

The interest-rate sensitive banking sub-sector slipped 0.85%. Five of the 11 major S&P 500 sectors were lower, with losses in the energy sector () weighing the most.

Hopes of a rate cut and recent optimism around the trade talks had propelled the benchmark S&P 500 to record highs in the previous two sessions.

“The (rate) cut expected today is largely baked in but the question is if the Fed uses this as an opportunity to pause and assess whether the easing that has taken place has had the desired effect,” said Mike Loewengart, vice president, investment strategy at E*TRADE Financial Corp.

U.S. economic growth slowed less than expected in the third quarter, a Commerce Department report showed, as declining business investment was offset by resilient consumer spending and a rebound in exports, further allaying financial market fears of a recession.

About 74.1% of the 278 S&P 500 companies that have reported so far have beaten profit estimates, according to Refinitiv data.

However, profit growth forecasts for the next four quarters have been revised lower, even as expectations of a drop in third-quarter earnings eased to 1.6%, compared with a 2.2% fall at the start of the month.

“Estimates in aggregate are coming down for 2020 and that’s one of the most telling things that’s happening in the markets,” said Thomas Martin, senior portfolio manager at GlobAlt Investments in Atlanta.

Shares of tech heavyweight Apple Inc (O:) and social media giant Facebook Inc (O:) fell ahead of their earnings reports due after the bell. They were the biggest drags on the Nasdaq.

Buoying the Dow was a 2.5% rise in shares of Johnson & Johnson (N:). The company said 15 new tests found no asbestos in a bottle of baby powder that the U.S. Food and Drug Administration says tested positive for trace amounts of asbestos. FDA said it stands by its finding.