It’s Fed day, and the overwhelmingly (but not universal) consensus is that the U.S. central bank will cut interest rates by a quarter-point on Wednesday — the third rate cut in a row.

To one long-time Fed watcher, that’s still not enough.

Joseph LaVorgna, chief economist for the Americas at French bank Natixis, tells MarketWatch that monetary policy is still too tight.

After all, he notes, the interest rate the Fed sets is still higher than most developed market long-term yields. 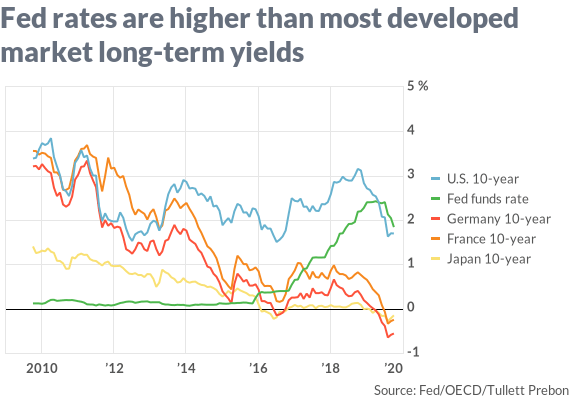 “The Fed needs to cut to un-invert the yield curve as the slope from fed funds to 10 years is still negative,” he says over email. The yield curve refers to the slope of the line measuring interest rates at different maturities — and an inverted curve has shorter maturities yielding more than longer ones.

And when’s enough cutting? “A steeper curve (and un-inverted) curve along with a weaker dollar and higher commodity prices will tell us the Fed has done enough,” he writes.

The trade-weighted dollar is nearly flat this year, and the International Monetary Fund’s index of primary commodities has fallen 1% through September.

It’s a huge day on the economics calendar. At 8:15 a.m. Eastern, the ADP report on private-sector hiring is released, followed at 8:30 a.m. by the GDP numbers that could show 1.6% growth in the third quarter. The Federal Open Market Committee interest-rate decision is due at 2 p.m. and Fed Chairman Jerome Powell steps to the microphone at 2:30 p.m.

Markets will be focused on what conditions Powell attaches to further lowering of interest rates. “In effect, the threshold for cutting could change from not seeing an improvement in the data – which is how we interpreted the guidance from the past several meetings – to needing to see some further deterioration,” said Jim Reid of Deutsche Bank. Incoming European Central Bank President Christine Lagarde said Germany and the Netherlands need to spend more.

Industrial bellwether General Electric GE, +0.00%  said it narrowed its loss during the quarter as it raised its estimate of free cash flow for the year. After the close, tech behemoths Apple AAPL, -2.31%   and Facebook FB, -0.05%  report results.

John Witherspoon, the actor with appearances in “Friday” and the animated series “The Boondocks,” has died at age 77.

The big question heading into Game Seven of the baseball World Series — whether Nationals ace Max Scherzer can be healthy enough to pitch.