The growing popularity of plant-based meat and other substitutes has spurred a rapid response from big meat companies, keen to capture a share of a market estimated to be worth $140 billion in 10 years time.

Could the evolution also act as a catalyst for a water-gulping industry to take the management of this resource more seriously?

Meat companies are among the most vulnerable to water risks, from flooding to drought to contamination, and yet they got the lowest scores in a new report from sustainability organization Ceres on water management.

The meat and dairy industry consumes about 40% of the grain grown as animal feed and accounts for 45% of irrigation demand for crops, Ceres data shows. That’s had the effect of draining aquifers in the Midwest and the West, the group told MarketWatch.

“Meat is the biggest laggard in managing water risk and it’s having a real financial impact on their businesses,” Brooke Barton, vice president of innovation and evaluation at Boston-based Ceres, and a co-author of the report, told MarketWatch in an interview. “The impact of meat production on water quality will be exacerbated as flooding becomes more frequent and severe due to climate change.”

The report grouped the 40 companies into agricultural products, beverages, meat and packaged foods sectors and ranked them from zero to 100 based on their water management approach. The highest score — 87 — went to Anglo-Dutch giant Unilever UL, +1.15%, which it ranked as a packaged food maker. The lowest went to poultry producer Sanderson Farms Inc. SAFM, -0.92%, which scored zero.

That means the company has no board oversight for water risk management; it does not tie the compensation of senior management to water targets or strategy; it does not assess water risks in direct operations; it does not assess it in its supply chain; it has no targets for sustainable sourcing goals for key commodities; and it does not offer farmers financial help to adopt practices that would reduce their water impacts.

A Sanderson Farms spokesperson was not immediately available for comment.

See also: This new study calculates the amount of extra food the world produces due to waste and overeating

In case you missed it: How to invest in water: A long-term bet on an essential commodity with limited supply

Meat companies overall scored just 18, which was up from 11 in 2015, when Ceres conducted its first water study. (Packaged foods took the highest score and showed the most improvement with a score of 47, compared with 31 in 2015. Beverage companies took second place with a score of 44, up from 23, while ag products scored 30, up from 13 in 2015.) 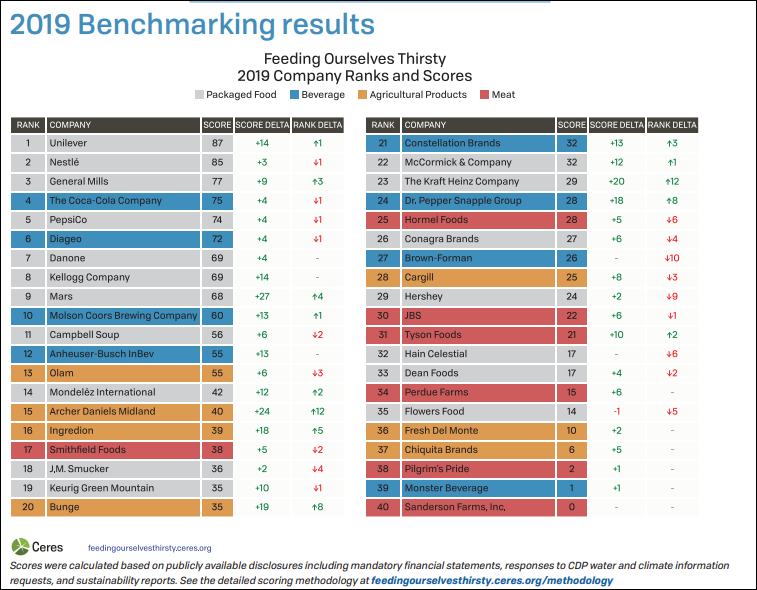 For consumers keen to do their bit to address climate change and the warming planet, “replacing meat in your diet is a good move,” said Barton.

Meat companies are also major polluters, as evident in the aquatic dead zone that forms every year in the Gulf of Mexico, due to the runoff of nitrogen and phosphorous-rich fertilizer and manure from meat companies and feed suppliers, the report found.

Then there’s the damage caused by Smithfield Foods when its North Carolina operations suffered overflows caused by flooding that tipped hog waste from lagoons into surrounding areas in the aftermath of Hurricane Florence in 2018.

That disaster happened as the company was already dealing with lawsuits brought by local residents over bad smells and potential diseases that were being caused by hog waste. Four federal juries have ordered Smithfield to pay almost $100 million in compensatory and punitive damages to date, said the report. 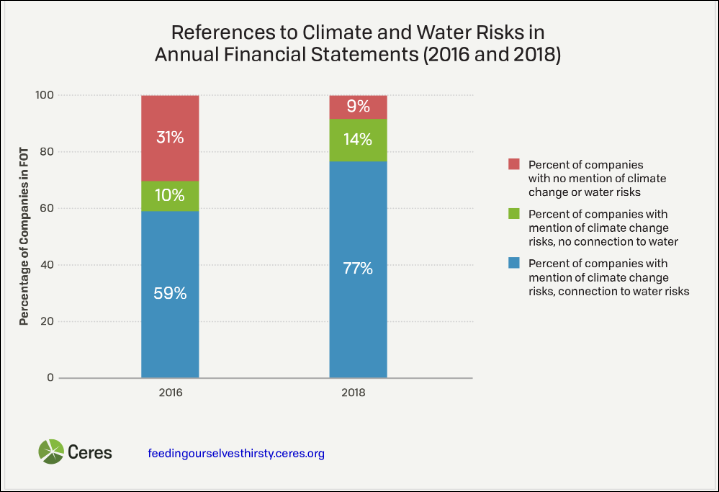 Other meat companies have already suffered losses and higher costs as a direct result of water-related risks, the report found. Tyson Food Inc. TSN, -0.67%, for example, saw its feed costs climb by $89 million in fiscal 2018 due to drought and global trade tensions, pressuring operating profit. Sanderson Farms third-quarter feed costs climbed by 5.8% a pound in the third quarter of 2018 from the year-earlier period, for the same reasons.

The floods that deluged the Midwest in the spring of 2019 and severe flooding in the Mississippi River basin caused billions of dollars of damages for farmers, agribusinesses and meat companies that rely on the American Farm Belt for the production and transportation of commodities.

“The floods caused millions of acres of corn and soybeans to go unplanted, driving up futures prices for the primary ingredients for livestock feed,” said the report. “This price shock affected the same poultry producers hit by the drought in Argentina the prior year.”

One bit of good news in the report: companies are waking up to the reality of water risk, and it’s showing up in financial reports with greater frequency. The bad news? Companies need to do a lot more to waterproof their businesses as the planet continues to warm.

Ceres is calling on companies to adopt practices to better assess, manage and measure water risk, including by supporting sustainable farming and helping bolster their supply chains against the extreme weather that is being caused by climate change.

It is also calling on investors to act by supporting shareholder resolutions on water risk and engaging fund managers and asset managers to make sure guidelines are in place and are followed.

“Meat companies can enhance the resilience of their supply chains while catalyzing improved environmental performance by making sustainable-feed sourcing commitments with an explicit focus on water quality,” said the report. “Yet, only two out of the seven meat companies benchmarked have done so to date.”

Ceres has developed an investor water tool kit as a resource to help assess and act on water risk in investment portfolios. The guide, which can be found here, includes links to relevant databases and case studies to allow investors from pension funds to endowments and asset managers understand and respond to water risk.

The stakes are high. The UN has said it expects global water demand to rise by 20% to 30% by 2050 to meet the needs of a population that’s expected to balloon to 9.8 billion. An MSCI analysis estimated that as much as $415 billion in revenue is at risk from water shortages, while another $248 billion is at risk from changing weather patterns hurting crop production areas, said Ceres.

Read now: I thought my meatless burger was the real thing — and that’s why the meat industry is headed for trouble