Home
Stocks
Key Words: ‘Rich Dad, Poor Dad’ Robert Kiyosaki says this is ‘the only rule’ for getting and staying rich
Prev Article Next Article

How can I get rich quick?

Robert Kiyosaki, the best-selling author of “Rich Dad, Poor Dad,” says he’s asked that a lot, and it’s the most disturbing question he gets.

“It’s the wrong question,” he explained in a post on the Daily Reckoning blog. “It tells me that they don’t have the foundation of financial intelligence required to use their money well if they do — somehow — become wealthy.”

To avoid such pitfalls, Kiyosaki’s “rich dad” taught his son the number one rule — “the only rule” — for getting and staying rich:

‘You must learn the difference between an asset and a liability and buy assets.’

It may be simple, or even anticlimactic, but Kiyosaki says most people without a proper financial education just don’t get it. “An asset puts money in your pocket,” he wrote. “A liability takes money out of your pocket.”

The truly wealthy understand this, Kiyosaki said, while everybody else will likely struggle until and unless they wrap their brains around the concept.

He used this visual to capture the concept: 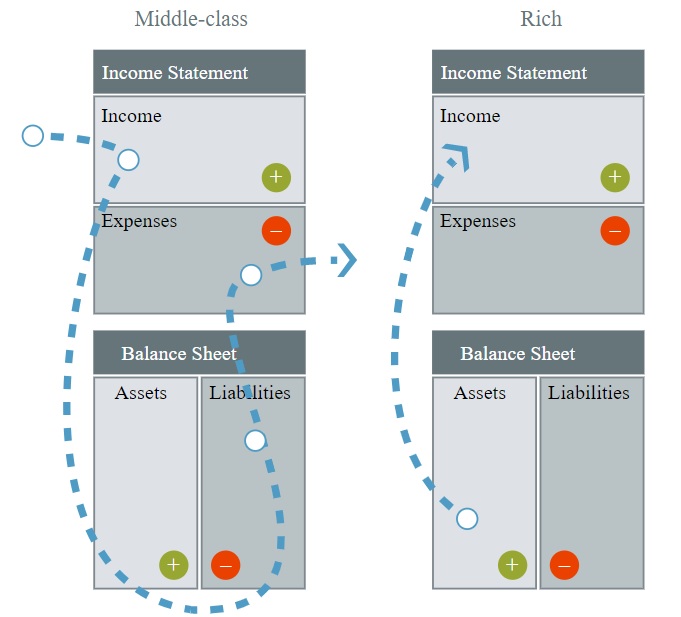 Kiyosaki also breaks it down in this short video: