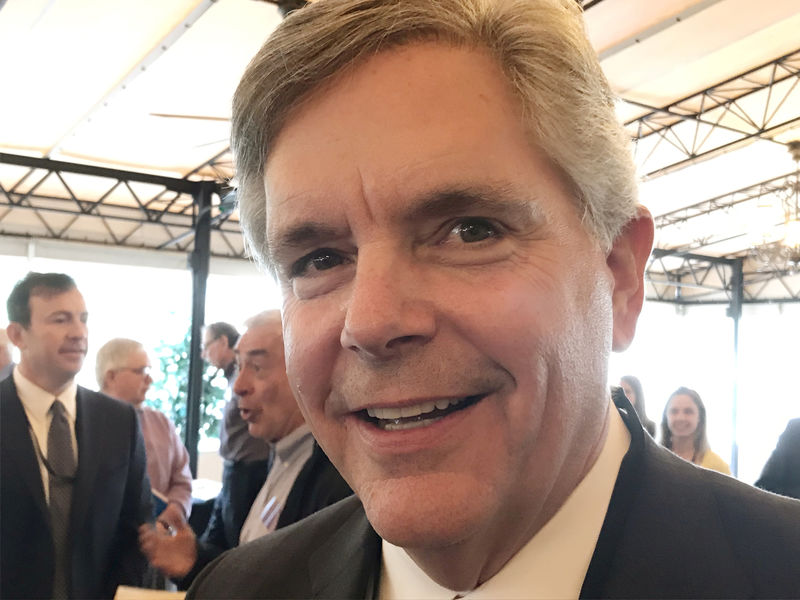 By Alwyn Scott and Sanjana Shivdas

The Boston-based conglomerate made the gains despite flat revenue and a $1.3 billion net loss, when one-time charges were included.

But improvement in its aircraft and healthcare businesses, and “stabilization” at its power unit signaled “progress in the transformation of GE,” said Chief Executive Officer Larry Culp, who has called GE’s planned turnaround from a disastrous 2018 “a game of inches.”

“People weren’t expecting the cash-flow increase,” said Deane Dray, an analyst at RBC Capital Markets in New York, who noted a lack of any surprises in GE’s report. “The market was braced for bad news.”

GE said it now expects full-year industrial free cash flow to be between $0 and $2 billion, up from its earlier forecast of negative $1 billion to positive $1 billion.

GE held other forecasts unchanged, though it trimmed plans for restructuring spending and noted EPS no longer reflects 5 cents a share of income from oil and gas company Baker Hughes Co (N:).

“The sweet number is $650 million in industrial free cash flow” in the quarter, said Nick Heymann, an analyst at William Baird and Co in New York, who expected $400 to $500 million.

GE now needs to generate about $2.6 billion of cash in the fourth quarter to meet the midpoint of its new forecast, said John Inch, analyst at Gordon Haskett in New York, about half what GE generated in the same quarter last year.

“This seems plausible, but hardly robust – regardless of the company’s cash guidance ‘raise,'” Inch said in a note.

Orders at GE’s ailing power division fell 30%, and orders for GE’s gas-powered turbines fell 17%. GE said it shipped five of its newest and largest HA gas turbines in the third quarter, after shipping just one in the first half. Power revenue, which includes gas, steam and nuclear equipment and services, fell 14% in the quarter.

Jet engine orders fell 27%, while engine service orders rose 15%. GE said it took a $300-million cash hit in the quarter from the grounding of Boeing Co’s (N:) 737 MAX jetliner, which uses engines partly made by GE. Culp said he does not expect the grounding to end this year.

The grounding, after a second fatal crash of the plane last March, means Boeing cannot deliver the jets to airlines, and GE therefore is not yet being paid for the engines it delivers, according to analysts. GE said it expects a similar hit of $400 million in the fourth quarter. Those numbers were in line with expectations GE set at the end of July.

GE took an $8.7-billion charge for reducing its stake in Baker Hughes to less than 50% in the quarter, a change that required GE to stop consolidating the oil and gas company’s earnings in GE’s results and to mark the remaining stake to fair value. Analysts had expected a charge up to $10 billion.

GE took a $1 billion charge for its long-term care insurance business to account for the effect of falling interest rates on its obligations. The charge was about what analysts expected.

GE also wrote off $740 million in goodwill for its hydro power business. Together, the insurance and goodwill charges amounted to 17 cents of EPS, GE said.

On an adjusted basis, which excludes such charges, GE earned 15 cents per share, compared with 11 cents analysts expected, according to IBES data from Refinitiv.