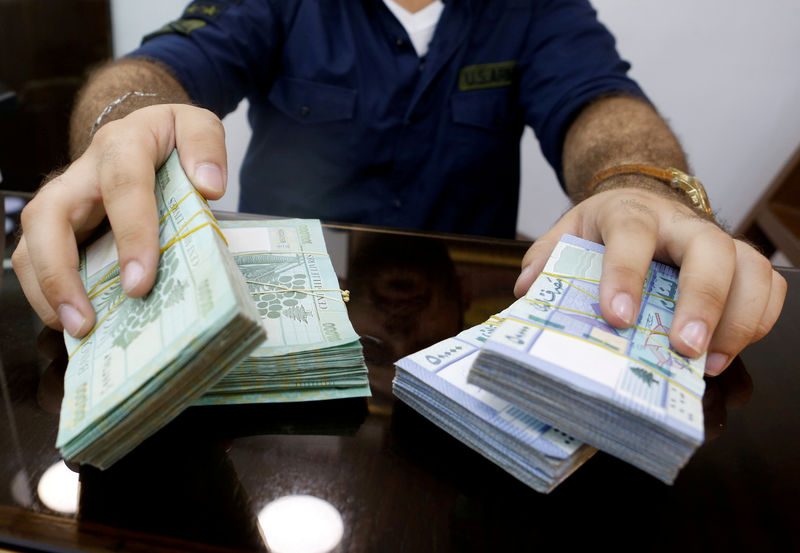 LONDON (Reuters) – Lebanon’s political and banking crisis has put growing pressure on its 22-year-old currency peg to the U.S. dollar and foreign funds fear a devaluation now could be disastrous for a country with one of the world’s biggest foreign debt burdens.

The risk of devaluation has risen as Lebanon grapples with its most severe economic pressures since the 1975-90 civil war, with widespread protests that have toppled the coalition government of Saad al-Hariri.

Central Bank Governor Riad Salameh governor once again ruled out a break in the long-standing peg on Monday, saying the government had the means to maintain it.

But with the black market exchange rate indicating a discount to the peg of more than 20%, observers say a double-digit devaluation has become increasingly likely, especially in the wake of Hariri’s resignation on Tuesday.

Unlike many other economies with such currency pegs, Lebanon has huge overseas liabilities, burdened by a debt to GDP ratio of around 150%, the third highest in the world.

That ratio would soar further under a devaluation, making Beirut’s ability to repay its debt tougher still.

“The fixed exchange rate and banking sector model have simply not been working for the wider economy,” said Timothy Ash, senior emerging markets strategist at BlueBay Asset Management, which was underweight heading into the crisis.

“Some combination of debt restructuring and a more flexible and competitive exchange rate seems likely.”

Lebanon has long been a comfortable part of many foreign funds’ portfolios and despite bouts of volatility, such as in 2008, when Hezbollah fighters briefly seized control of the capital, it has never defaulted on its external debt.

BlackRock (NYSE:), JPMorgan (NYSE:), Amundi, Credit Suisse (SIX:) and Invesco are among the world’s big international players holding Lebanese debt as of Sept. 30, according to Morningstar and EPFR Global data.

But the latest crisis threatens that dynamic – and the peg, which has helped provide an anchor of stability since its introduction in 1997. The peg has remained fixed at 1,507.5 pounds per dollar.

High levels of U.S. dollar denominated debt, which makes up nearly half of Lebanon’s total liabilities, is one reason why a devaluation could be more painful than those experienced by other emerging markets, including Thailand, Indonesia and South Korea during the Asia financial crisis in 1997.

“Having such large FX liabilities is the original sin of emerging markets,” said Brett Diment, head of global emerging market debt at Aberdeen Standard Investments, which sold all its Lebanon positions over a month ago.

“During the 1997-98 Asia crisis most of the debt was local currency debt, not dollar debt. Most other emerging markets have most of their debt as local so it doesn’t cause so many problems in a situation like Lebanon is in.”

Unlike Gulf states, which have in the past provided financial support for Beirut, Lebanon does not have the enormous riches from oil revenues to help prop up its peg.

Instead, it has relied on huge inflows from its sizeable diaspora to fill the deposits in its banks, which in turn helped finance its deficit and towering debt burden. But as those flows have faltered recently, the problems for Lebanon’s economy have mounted.

Even so, Lebanon had “comfortable” levels of gross official reserves of around $38 billion as of mid October – on the face of it equivalent to about 12 months of imports, estimated Garbis Iradian, chief economist for Middle East and North Africa at Institute of International Finance.

He put the risk of a devaluation at less than 50% in the short-term, but admitted a protracted political hiatus could yet see a devaluation of more than 10%.

The question is how much of those reserves are available – some estimate usable reserves could be as little as a quarter of that – and how much of those have been used up in the past few weeks of turmoil, during which the country’s banks have been closed for 11 straight days. The banks partly reopen on Thursday to assess the damage to their deposit bases and aim to fully reopen on Friday.

Those reserves are measured against a heavy redemption schedule, starting with a $1.5 billion dollar bond due at the end of November, and secondary market bond yields indicating a two-year cost of borrowing in excess of 30%.

Another Middle East neighbor, Egypt, was among the latest to devalue its currency when it cut the value of its pound by about half in late 2016 in return for a $12 billion loan program from the IMF.

Despite initial pain caused by a spike in inflation, which analysts say would happen in Lebanon too, Egypt netted hefty inflows of foreign investment in subsequent years.

Lebanon is badly in need of such flows to help build its tiny industrial sector and bolster tourism, which had been on course for its best season since 2010 until protests hit two weeks ago.

Lebanon has so far not asked for support from the IMF and Hariri has previously expressed reservations about IMF proposals which he said included floating the pound.

But with Hariri gone, investors are still waiting to see if any new government might take a different view on the peg and IMF support.

“If uncertainty prevails for a long time a devaluation becomes more likely and that could exceed 15%,” said Iradian.