If you don’t think rumors of Lincoln division’s impending death a mere couple of years ago were exaggerated, take a gander at the 2020 Lincoln Aviator . It is what American luxury was always intended to look like: big, comfy, quiet and powerful. Oh, and unlike the MKT it replaces in Lincoln’s lineup, it’s stylish as all get out. And, what do you know, it’s rear-wheel drive (RWD).

Yes, the argument can be made that Aviator is related to the Ford F, +0.35%   Explorer. At least in some of the components you don’t see. However, clock a few miles as driver or passenger in this all-new 3-row luxury CUV and any comparison to the Explorer will simply evaporate. Not a gussied-up Explorer, the Aviator is a luxury vehicle of the first order.

Perched behind the wheel, the Aviator seems bigger than it is both inside and out. It feels substantial (and is, at roughly 5,000 pounds) as it glides smoothly down the street. The 3.0-liter V6 twin turbo works quietly behind the scenes, only letting you know it’s busy when coaxed to pick up the pace through the accelerator. Then it engages its 415 lb-ft of torque and gathers up its 400 horsepower to mount an impressive offense. Those wishing for even more hp and torque can opt for the Grand Touring versions, using the same V6 paired with an electric motor. This plug-in hybrid (PHEV) can travel about 18 miles (or more, according to Autotrader’s Brian Moody) on electric-only power. 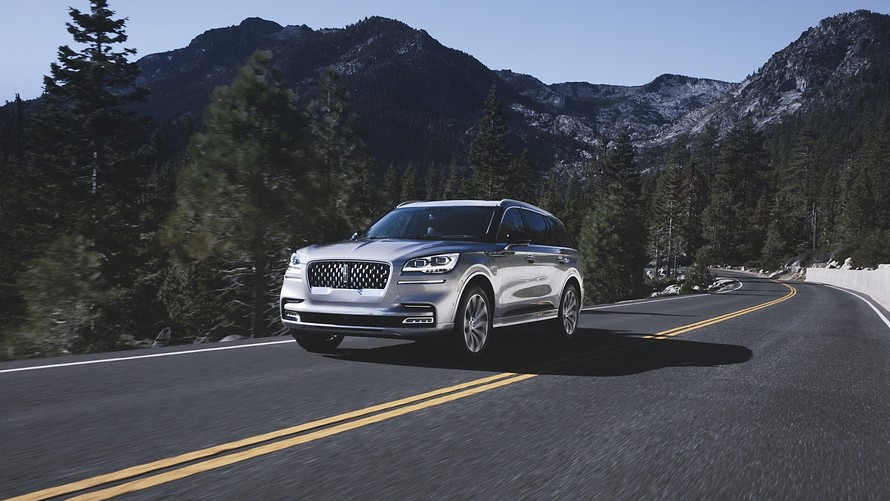 The 2020 Lincoln Aviator cruises along quietly, and feels substantial on the road.

Brian also added, “The Lincoln Aviator is the best looking luxury SUV you can get. It looks fresh and contemporary. There is a traditional vibe that hints at the past but Lincoln resisted the urge to go full retro. The interior is especially elegant with interesting colors and textures. It’s not inexpensive but at least there’s enough going on inside to help justify the cost.”

A bold move on Lincoln’s part, the new Aviator checks all the luxury boxes, delivers impressive get-up-and-go and offers all-wheel drive (AWD). We think it sets a new bar in 3-row luxury crossover cabins. It’s a world-class luxury CUV fully capable of running with the likes of the BMW X5, the Audi Q7, the Mercedes-Benz GLE Class and the Cadillac XT6.

Replacing the MKT in Lincoln’s lineup, the 2020 Aviator is all new.

Powering all grades except the Grand Touring trims is a 3.0-liter twin-turbo V6 generating 400 hp and 415 lb-ft of torque. A new 10-speed automatic transmission delivers output to the rear wheels. AWD is standard in the Aviator Black Label and available in the lower two trims. Mileage is a government-estimated 18 miles per gallon in the city, 26 mpg on the highway and 21 mpg in combined driving. Adding AWD reduces the numbers to 17 mpg city/24 mpg hwy/20 mpg combined. No doubt fuel economy is aided by auto start/stop technology on the V6, as well as automatic grille shutters.

The Grand Touring and Black Label Grand Touring share a gas-electric PHEV system. It pairs the same V6 turbo found in gasoline-fueled Aviators with an electric motor. The result is a combined 494 hp and 630 lb-ft of torque. The big torque boost probably won’t mean too much in terms of improving acceleration times because the hybrid system adds roughly 800 pounds to the regular Aviator. Fuel-economy numbers for the Grand Touring were unavailable at this writing.

Optional on Standard is heated second-row seats. Optional on both Standard and Reserve is AWD. Options shared by Standard, Reserve and Grand Touring are the heated steering wheel and heated wiper blades. Optional across all trims is Alexa capability.

Also read: Watch out for these hidden financing traps when buying a car

To the Grand Touring standard equipment, Black Label ($78,790) adds most of the Standard, Reserve and Grand Touring options, as well as 22-in bright aluminum wheels and perforated Savanna leather seating, but it loses adaptive steering. All Black Label options were listed above.

The Black Label Grand Touring ($88,895) gets all of the Black Label’s gear and options, plus adds back adaptive steering. Also included as standard are 21-in bright machined-aluminum wheels.

Aviator has the full range of expected passive safety features like traction control, stability control and antilock brakes. It also has eight airbags. Every Aviator also comes with the Co-Pilot 360 suite of safety technologies. Moving up to the Reserve gains 360-degree surround-view cameras. Grand Touring adds adaptive steering. Black Label adds Co-Pilot 360 Plus and adaptive LED headlights, which are optional on Reserve and Grand Touring.

No third party has safety tested nor crash tested the 2020 Lincoln Aviator.

Most of our driving of the V6 turbo was in a Black Label version in downtown Atlanta, with a few expressway miles tossed in for good measure. Forgetting for a moment the exquisitely crafted cabin with its supple leather and other high-end appointments, including the 28-speaker Revel audio system, merely piloting Aviator down the street is an exercise in pure joy. Unless you unleash your right foot triggering an explosion of thrust and, yes, some commotion from the engine bay, the Aviator cruises along as quiet as a second-story cat burglar. We found the 30-way power adjustable seats a bit fussy, but that’s a small nit to pick.

This is a heavy vehicle and it feels substantial on the road. But, it is highly responsive and easy to maneuver through traffic. Front- and second-row passengers have no shortage of stretching-out space. Fine for children, the third row is a bit stingy.

Brian Moody spent a few hours in the PHEV Grand Touring version. Here’s his take: “In the PHEV version of the Aviator, Lincoln says there’s an 18-mile EV range. However, when driving the car on the freeway in 105 degree temperatures with the air-conditioner blasting, we were getting 23 miles of range. The plug-in version also feels very quick.”

Clearly Lincoln has achieved what it set out to do: Engineer and build a world-class luxury vehicle. As Lincoln and Ford turn their attention away from cars to crossovers, they must create CUVs that make us forget they were ever in the car business at all. The Aviator is such a crossover. It performs like a big sedan — both in accelerating and handling. Quiet, comfortable and quick, it covers all the sedan bases. And in the case of the Aviator, it’s luxurious to boot.

Other cars to consider

2020 BMW X5—Redesigned, the X5 is available with a turbo V6 that’s less powerful than Aviator’s V6 or a V8 that’s more powerful — more expensive, too. But, the handling is sportier than the Aviator’s.

2020 Cadillac XT6 — All new for 2020, the XT6 is a 3-row crossover powered by a V6. It doesn’t pack the performance wallop of the Aviator, but it’s comfortable. If you are looking at a Standard or Reserve Aviator, the XT6 is a solid alternative.

2020 Infiniti QX60 — If you are on the market for a more affordable luxury 3-row crossover, the QX60 is a good choice. It’s comfy and luxurious with a pliant ride. Oh, and the opening price is thousands less than some others in the segment.

2020 Volvo XC9 — A terrific execution of the 3-row luxury crossover, the XC90 offers an uncomplicated, comfortable cabin and a choice of propulsion options, including a PHEV.