Home
Stocks
Popeyes, looking for another sales bump, will bring back the chicken sandwich on Sunday
Prev Article Next Article 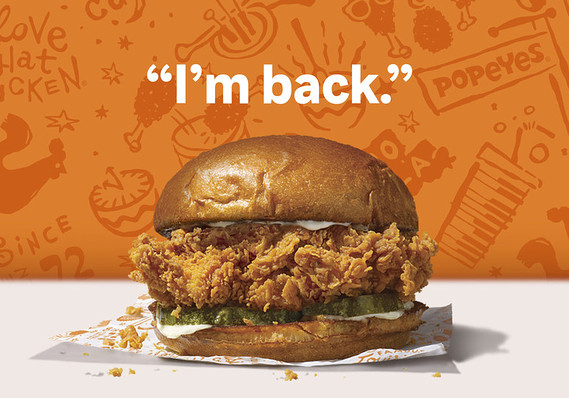 Popeyes is bringing back its popular chicken sandwich this Sunday, Nov. 3, and likely hoping for a repeat of the big bump in sales the chain saw when it was introduced in August.

Coincidentally, Chick-fil-A is closed on Sundays.

Popeyes announced the return of the chicken sandwich on the same day that parent company Restaurant Brands International Inc. QSR, -1.50%   announced third-quarter results. While earnings were in line with expectations, sales fell short.

Popeyes was a bright spot for the quarter with 15.6% sales growth to $1.1 billion and 9.7% same-store sales growth. Other brands in the Restaurant Brands International portfolio are Burger King and Tim Hortons.

On the earnings call, Jose Cil, chief executive of Restaurant Brands International, said the chicken sandwich launch exceeded the company’s expectations, adding that the same-store sales result was one of the highest growth rates of the past two decades for the brand.

“While the chicken sandwich was an important component of overall sales growth in Q3, it’s important to remember that it was only in stores nationally for about two weeks,” Cil said on the call, according to a FactSet transcript. “The demand was so overwhelming that the supply we secured to support an aggressive sales forecast over several months ran out in approximately 14 days.”

According to data from Placer.ai, a company that tracks industry trends and provides retail intelligence, Popeyes traffic in August 2019 was 65.2% above the baseline established between July 2017 and September 2019.

“Popeyes saw so much value in the craze that their daily visit numbers came into Burger King range, even though they have less than a third the number of U.S. locations,” Placer.ai wrote on its blog.

There were 3,192 Popeyes restaurants at the end of the third quarter versus 18,232 Burger King locations.

For the new launch, the company sounds like it will be better prepared to meet demand.

“Our teams and franchise partners have been working around the clock over the past two months to make sure we’re ready to relaunch and we’re excited it will be back out in the market in just a matter of days,” Cil said.

While Popeyes and Burger King showed growth during the quarter, Tim Hortons struggled. Sales fell 0.1% to $1.77 billion, and same-store sales were down 1.4%. Cil identified weakness in cold beverages, and said the company is focused on key areas like coffee and food innovation.

“While global Burger King and Popeyes comps beat expectations – substantially in the case of Popeyes – yet another quarter of Tim Hortons misses will only fuel concerns about that brand’s health,” wrote Bernstein analysts in a post-earnings note.

While analysts found reasons to be optimistic, they say they will be watching “the outlook for fundamental and – potentially managerial – change at Tim Hortons,” analysts said.