Home
Stocks
Outside the Box: These numbers show just how much the lives of everyday Chinese have improved in recent decades
Prev Article Next Article

Central Beijing came to a standstill on Tuesday as China held a massive military parade to commemorate the 70th anniversary of the People’s Republic founded by the Chinese Communist Party (CCP) in 1949. More striking than the DF-41 missiles and the 15,000 marching soldiers, though, was the extraordinary outpouring of patriotic fervor on Chinese social media.

On WeChat, the ubiquitous Chinese messaging app, my feed was dominated by posts from Chinese contacts who hailed the rising strength and prosperity of their country over the past decades. These mostly affluent Chinese, many with international experience, seemed to focus more on China’s successes than rising authoritarianism, militarism and repression.

The rapid economic advances enjoyed by China’s population over the past generation suggest that Washington may be underestimating Beijing’s staying power as it seeks an edge in the trade war that began last July. China may want to reach a deal to reduce the growing pressures on its economy, but it does not face anything like the popular protests sweeping Hong Kong.

American policy makers often draw a sharp distinction between what the historian Jeffrey Wasserstrom has termed “big bad China and the good Chinese people,” stressing that today’s more hawkish China policy is directed against the CCP and not the ordinary people who “dream of freedom.”

Yet China contains multitudes — not just dissidents, democrats, and human rights defenders — and many Chinese are vocal supporters of their government.

Indeed, various multinational opinion surveys consistently find a “high level of regime support” in China, even after factoring in the possibility that some people hide their dissatisfaction for fear of political repercussions. In 2014, Pew Global Research found that a staggering 92% of respondents had “confidence” in their country’s leader, Xi Jinping.

There’s no doubt China’s expansive system of propaganda, censorship and “patriotic education” helped shape such views, but we would be remiss to ignore the many reasons Chinese have to feel satisfied with their government’s performance. One particularly striking example is that a large majority of Chinese believe their children will be better off financially than their parents, while most Americans think their children will be worse off.

Chinese are more optimistic than Americans 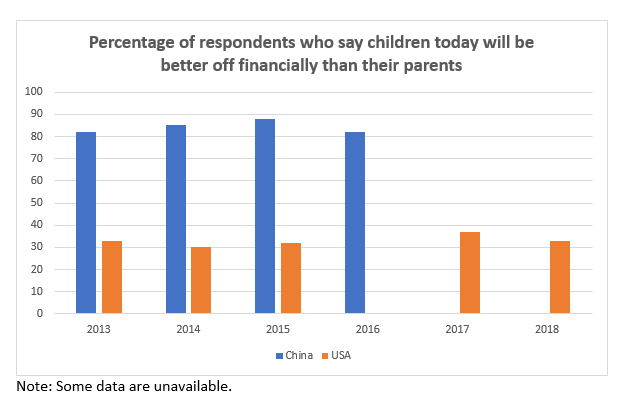 But these well-worn aggregate figures can make it difficult to appreciate the magnitude of change in the daily lives of Chinese people — the type of improvement in living standards likely to encourage sympathy with one’s government and inspire pride in one’s country. Data collected by the National Bureau of Statistics between 1981 and 2012 show how China’s growth precipitated an explosion in access to consumer goods taken for granted in developed nations, such as air-conditioners, refrigerators, and washing machines. 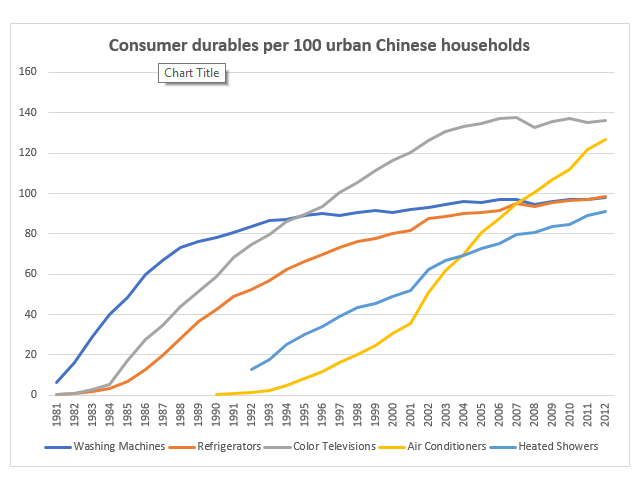 Although housing and employment are becoming increasingly inaccessible in top-tier cities, well-off Chinese now study overseas, travel the world, and consume luxury goods like their Western peers. Money is everywhere. From 2006 to 2018, the prevalence of ATMs rose by over 900% from 9.6 to 96.8 per 100,000 adults, a higher ratio than in Hong Kong or Italy, for example, although the U.S. has 173.90 per 100,000 adults, according to the same Word Bank data. Young Chinese espouse a diversity of opinions about their country but a large number, accustomed to the good life of a rising power, see no reason to question the status quo.

Read: 4 economic disputes where major nations are playing a game of chicken

Western media rightly focus on how Beijing’s self-serving prioritization of “the rights to subsistence and development” over the protection of individual liberties has caused suffering for countless opponents of government policy. Nonetheless, to understand the resilience of the Chinese regime, one must also consider the many Chinese, of all ages and backgrounds, who think the government generally works and take pride in a patriotism anchored in the CCP.

In a capitalist world that venerates economic growth, the United States and its Western allies must reckon with the perceived performance legitimacy of the Chinese system. Unlike the former Soviet Union, China is an authoritarian state that has embraced market reform as a governance tool to continually improve the material living standards of its people.

This progress presents an additional hurdle for the United States in its burgeoning competition with China, one that is underappreciated by officials who assume a simple opposition between the Chinese state and Chinese society.

Barring a catastrophic economic collapse — and the trade war is more likely to produce a continued gradual slowdown accompanied by official efforts to boost nationalism — many Chinese will stand by their government in a U.S.-China dispute.

Opinion: Trump will soon end the trade war with China because he doesn’t really care about winning it

Neil Thomas is a research associate at MacroPolo, the in-house think tank of the Paulson Institute in Chicago. The views expressed in this article are solely those of the author and do not necessarily reflect those of his employer. Follow him on Twitter @neilthomas123.