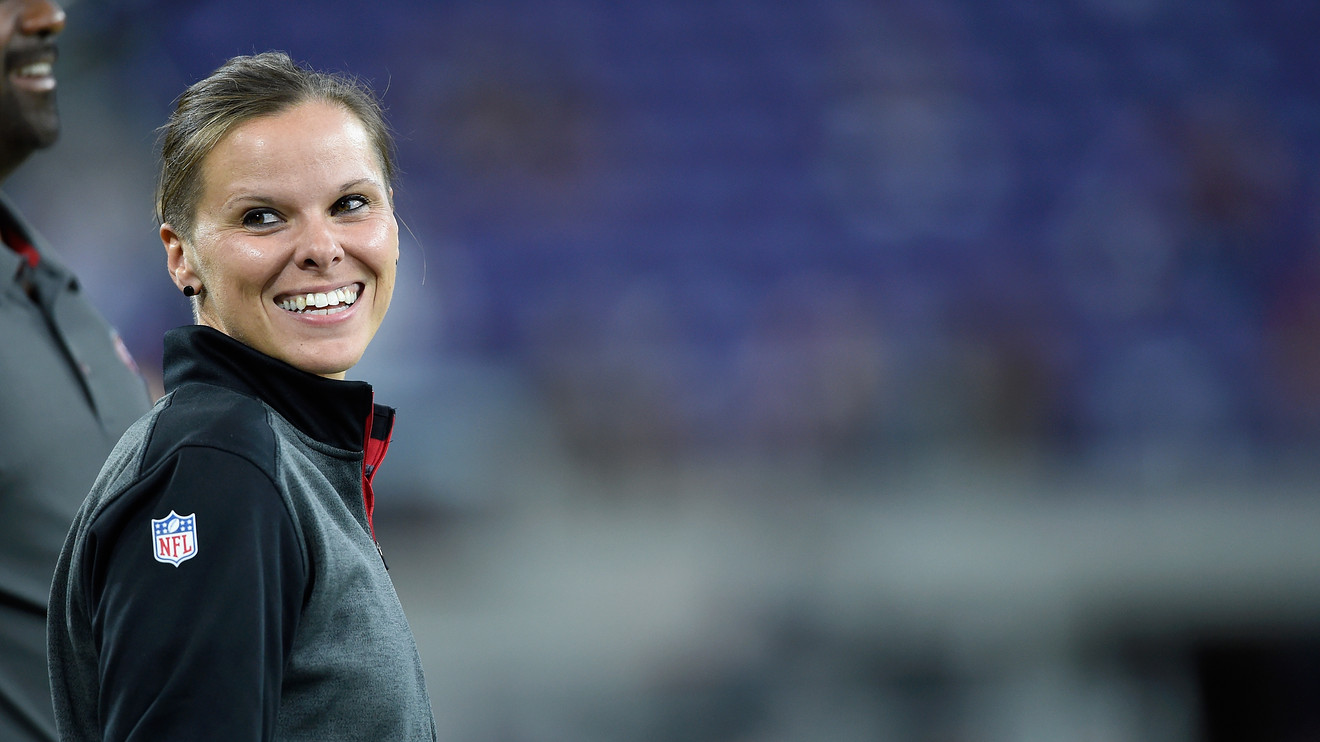 When Katie Sowers was growing up, she loved football and played as much as she could. She played in a women’s tackle league when she got out of college and dreamed of coaching in the NFL. But she didn’t know if that dream could become a reality until she saw a woman get a full-time assistant coaching job in the NBA in 2014.

“I always knew I wanted to coach, but I didn’t know I could coach in the NFL until I saw Becky Hammon become a coach in the NBA. I had this weird feeling then, knowing it was going to happen. I even posted on Instagram: ‘NFL, I’m coming for you.’ It’s hard to explain, but I was positive I was going to make it happen,” Sowers recently told MarketWatch.

But at the time she was working as the athletic director for the city of Kansas City and coaching a fifth grade girls’ basketball team. How did her next employer become the NFL?

“I always preach that you never know who is watching, so I put everything into that team,” Sowers says of her fifth grade hoop players.

And it turns out that a gentleman watching them play was Scott Pioli, a former general manager of the NFL’s Kansas City Chiefs. His daughter was on the team.

Pioli was impressed with how Sowers coached. The two began talking and he learned how passionate she was about coaching in the NFL. When he became the assistant general manager of the NFL’s Atlanta Falcons, he offered her a coaching internship during the preseason as part of the Bill Walsh NFL Coaching Diversity Fellowship. Pioli kept her on as a scout, and she worked closely with him and the coaching staff in 2016.

Sowers, 32, grew up loving football, but didn’t see playing on the boys’ high school team as an option, so she played sports that could help her get an athletic scholarship to college. Which she did, for basketball. After college, she played professional tackle football as a quarterback for the Women’s Football Alliance, and she played for Team USA in 2013.

She also dedicated a lot of her time to studying coaches, knowing she wanted to be one. Her favorite coach today is Hammon, who is an assistant coach with the San Antonio Spurs, and one of her favorites all-time is Bill Walsh. “To be honest, though, I always looked up to my dad. How players related to him and how he changed their lives as players and as people. I wanted to have that kind of impact.”

Her dad coached the women’s basketball team at Bethel College, and she spent a lot of time with him and his teams.

“We find it so odd when women lead men, but women have been teaching men for years. We have to normalize it.”

After working with the Falcons, she went to the San Francisco 49ers, where she now works with wide receivers as a full-time assistant coach.

“I was looking for a full-time job and wanted to prove I was valuable. We had a preseason game in Kansas City and it was supposed to be the last day of my internship. John Lynch — the general manager of the 49ers — said, ‘We want to keep you on full-time.’ My family was on the sidelines and I went over to them and I almost had tears in my eyes.”

How’d she make that happen? To prove her value to the team, she says she didn’t depend on others to teach her things. She took initiative and responsibility for where she wanted to be, something her father taught her when she was younger. For example, she took all the team’s offensive concepts and created a packet for them — something that had never been done before, and something new players coming into the league now ask for.

Sowers says that when she first applied for the NFL’s Diversity Coaching Fellowship, there was nowhere to say on the form that she was a woman. “I felt worthless, even though I’d been the MVP for team USA and had been an All-American athlete. And she says once when she was a coach for the Falcons, someone asked her if she was the coach of the team’s cheerleading team. “They couldn’t wrap their head around it, but we’re getting there.” In fact, the NFL has since revamped the fellowship application to include women, and she points out that the NFL has made a lot of progress hiring more women and minorities to coach in recent years. “I think we’ll get to a point when a woman is hired and it’s not a headline,” she says.

There were three women with full-time coaching jobs in the NFL last year, according to ESPN. In addition to Sowers, Kelsey Martinez was with the Oakland Raiders and Phoebe Schecter was with the Buffalo Bills. In addition, seven other women had internships with NFL teams. Though it’s been reported that Sowers is the only full-timer to coach for more than one season.

“We find it so odd when women lead men, but women have been teaching men for years. We have to normalize it,” says Sowers, whose mother was a teacher.

Sowers is also the first openly gay coach in the history of the NFL. That became a big story when a reporter asked her if it was okay to mention that she had a girlfriend. “I didn’t think anything of it; I’d been out for a long time. But the next day the story blew up,” she says, adding that she chooses to live a vulnerable and open life. “Being open is living with integrity,” she says. “I can’t be the best coach I can be without that.”

She also says that after the story ran, a former NFL coach came up to her and told her he was gay. He said he had struggled with it and was so happy to see her come out. “I realized then that it was important that article came out,” she says.

When it comes to predicting a college player’s success in the NFL, Sowers says she evaluates route running and what offense the college team ran. She also wants to see explosiveness and whether they’re coachable and internally motivated — with a desire to be the best version of themselves. “Relying on combine numbers is the safe way out,” she says, adding that to find diamonds in the rough you have to interview players and look past the numbers.

What’s the most important skill for a wide receiver to achieve success in the NFL? “Being explosive and having aggressive hands — the attitude that that ball is mine, and no one else’s.”

And does she think a woman will be a head coach in a men’s professional league in the next 20 years? “Absolutely. No doubt,” Sowers says. “It wouldn’t surprise me if Becky Hammon gets a head coaching job in the NBA in the next five years.”