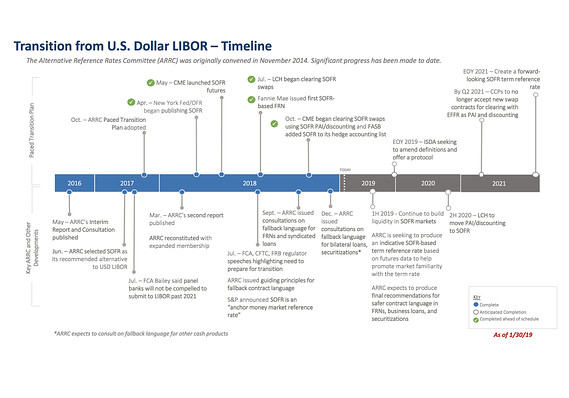 A new interest-rate index can be a suitable replacement for Libor, the current benchmark rate index set to be retired after 2021, a working group of finance professionals has determined.

That means the mortgage industry should start soon to prepare for the transition to the new index, the group told reporters Thursday.

The London Interbank Offered Rate tracks the interest rates that banks use to lend to each other over the short term. Many adjustable-rate products, including mortgages, have long used Libor as a “reference,” but the index was tarnished by a price-fixing scandal that came to light in 2012, and the financial industry had to find a replacement.

See: The average adjustable-rate mortgage is nearly $700,000. Here’s what that tells us.

The proposed replacement, which is called the Secured Overnight Financing Rate, has been under consideration by the Federal Reserve working group since it convened 2014. The Alternative Reference Rates Committee includes professionals from mortgage guarantors Fannie Mae and Freddie Mac, as well as regulators.

The committee has determined that this rate will work well for the mortgage industry, by meeting consumer needs and attracting “investors at rates consistent with, and as determined by, competitive markets,” committee members told reporters.

Fannie FNMA, -1.07%   and Freddie FMCC, +0.00%   are already starting to build out their systems to accommodate a link to SOFR. But Nadine Bates, Fannie’s treasurer, noted that it could take as much as 12-18 months for the industry, including lenders and other originators, to prepare for the transition.

Still to be determined: how “legacy” products, or mortgages that were previously taken out with rates tied to Libor, will be handled after the index is retired.

ARRC on Thursday also released a white paper that demonstrates how basing an adjustable-rate mortgage on averages of SOFR rates can provide borrowers with stable rates. Because it would be based on averages that are set in advance of the ARM reset dates, it would provide “certainty,” the group said.

“The reset frequency would be set at six months to mitigate any potential mismatch between the loan rate consumers pay and changes in market interest rates related to expectations of future changes in economic conditions, and rate caps would be adjusted accordingly.”

Adjustable-rate mortgages were frequently used as “teasers” to get consumers into homes they could not afford during the housing bubble. When those mortgages reset at higher rates, many homeowners could no longer afford the mortgages. Regulations passed after the crisis made it mandatory for lenders to ensure consumers can afford the ARM throughout its entire life, no matter what it resets to.