The Nasdaq is set to post its first negative week in 11.

The tech-heavy index is down 2 percent since Monday, coming off its longest weekly winning stretch since December 1999. That run preceded the dot-com bust just months afterward, a wave of selling that swept tech stocks from highs.

Rather than a warning sign for the Nasdaq, LPL Financial senior market strategist Ryan Detrick says history suggests this kind of winning streak is actually a bullish sign.

“If you go back in history since the Nasdaq started in the early ’70s, what we found 12 months after these long win streaks, the Nasdaq was actually higher seven out of eight times a year later. The only time it was lower was the tech bubble,” Detrick said Thursday on CNBC’s “Trading Nation.”

“Look at the S&P 500, the exact same thing,” he added. “The S&P was higher seven out of eight times a year after Nasdaq strength like this. … The S&P was just above its 10-day moving average for 40 days in a row, the longest streak in nine years and again forward returns after long streaks like that, very strong also.” 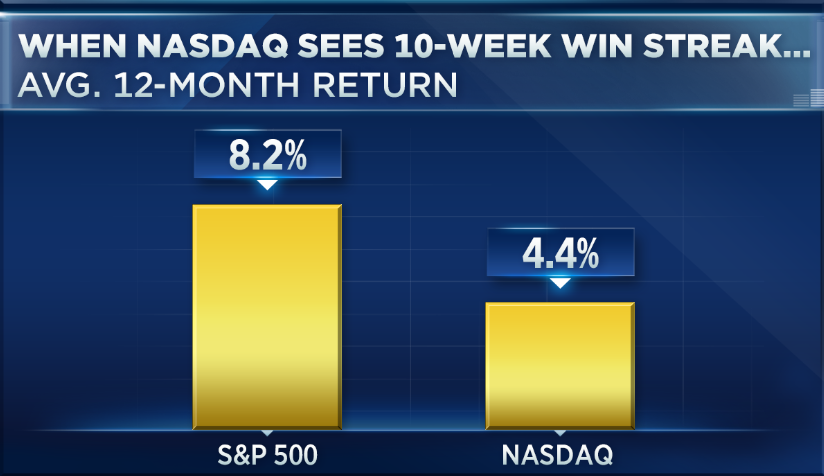 “These streaks that we’re talking about really do suggest to us that this bull market is alive and well and new highs in the S&P and Nasdaq in the second half of this year,” said Detrick.

The bull market will reach its 10-year anniversary on Saturday, the day that marked the closing low of the financial crisis. Detrick says one thing has characterized the low points.

“The hallmark we’ve seen really for the last 10 years … has been panic and fear on pullbacks,” said Detrick. “We just had a 20 percent correction. … Analysts drastically cut their earnings guidance. Our view there is once again people are panicking. The underlying fundamentals of this economy really still are strong.”

Stocks have bounced strongly off a sharp downturn late last year. Since their December lows, the S&P 500 has rallied 17 percent and the Nasdaq 20 percent.